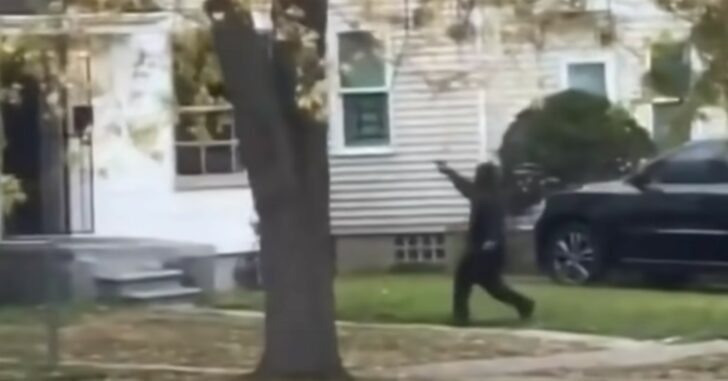 DETROIT, MICHIGAN — What started as an argument turned potentially deadly after a man went back to his car to grab a firearm and shoot blindly into a home. The reason: Someone said that this baby was ugly.

The video was taken by a neighbor who started recording when the arguing began. Little did he know that it would turn deadly serious in a hurry.

The video shows a woman at the home arguing with a couple outside. Then the man and woman rush into the home. The man runs out, goes to his car and grabs a gun.

A man nearby urged the man not to start shooting. There was a 6 or 7-month-old baby inside the car. The man started shooting anyway.

The man was obviously in no danger, and this clearly wasn’t a case of self-defense. Rather, it was a case of revenge for some words that were spoken. So grown-up. Such wow.

Watch the video of the incident below:

Police were already called prior to the shooting, and were on the way when it happened.

Multiple people were inside the home, including children. The man with the gun also had a 6-month-old child in his car. Father of the year award, I know.

The pair fled, but police quickly caught up with them. They were arrested and charges are pending.

Previous article: BREAKING: Biden Declared Winner of 2020 Presidential Election Next article: Burglar, Trying To Escape, Is Shot By Homeowner. Note: The Law Will Not Be On Your Side