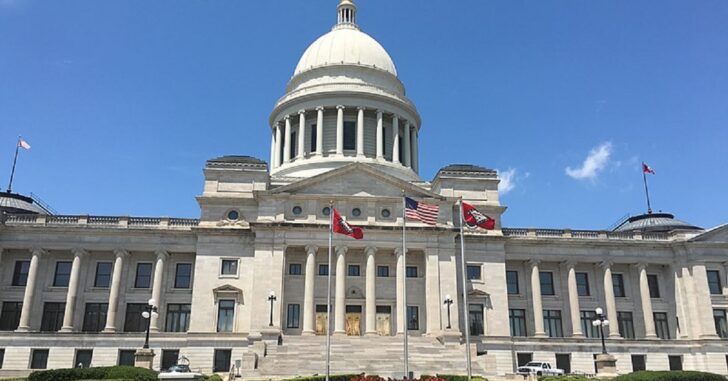 The intent of the bill, of course, is to acknowledge more of the very real burden on the average American citizen to act when threatened, or when you see others threatened around you.

House Bill 1059, as the measure is called, was introduced by Representative Aaron Pilkington, who claims he simply wants Arknansans to be able to protect themselves better.

Let’s say someone came up to your yard, had a gun, and said, ‘I’m going to shoot you, I’m going to kill you for what you did’… your duty right then is to turn around and go inside your house. And the second you turn they could shoot you in the back and you were just trying to follow the law.

You might think that refusing to turn your back and die would be fairly uncontroversial, but then — as we all know — the subject of guns is not one to inspire rational thought in the minds of the opposition.

Take, for example, the objection of Senator Greg Leding, a man with a history of opposing Second Amendment-friendly laws:

I would ask representative Pilkington how many times he’s been confronted in his front yard by an armed individual. That’s what law enforcement is for. And I just really think that this type of legislation, if it were to become law, could end up with a lot of tragic stories.

If your argument against a law — any law — is “I just really think,” which could be re-articulated as “but I just really don’t like it,” you don’t need to be articulating your thoughts concerning it if you’re in power.

To Leding’s point, I would have to ask him how many times he has had his life in danger and thought “You know what? I can wait five minutes!”

Pilkington noted, of course, that this isn’t carte blanche to attack every Bob, Dick, and Jane walking down the street. This is to stop deadly threats.

You cannot be the aggressor in the situation… someone has to be attacking you. We have a provision in it, as well, that if you’re experiencing or encounter a sexual assault such as a rape that you’re able to use deadly force. Currently, right now, let’s say jogging in a park and you were to come upon a situation like that where someone was being sexually assaulted. You’re not allowed to use any sort of force to end that situation. You have a duty to retreat and call police.

It is difficult to believe how any rational mind would stand opposed to this.

Previous article: #DIGTHERIG - Andy and his Glock 19 in a Vedder Holster Next article: GUESS: Is This A Zoomed-In Photo Of A Lush Forest, Or A Carry Gun That Hasn't Been Cleaned In Years?