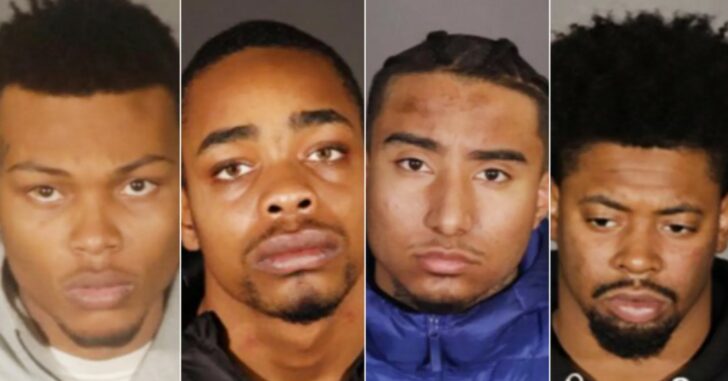 LOS ANGELES, CALIFORNIA — A 23-year-old man is dead after police say he tried helping a woman who was being robbed by a group of men outside a restaurant. The man, identified as Jose Ruiz Gutierrez, was fatally shot during the encounter.

Police identified the suspects, all who have been since arrested, as;

As part of the investigation, police located all four pieces of trash through a series of raids.

During the raids, authorities recovered a Rolex watch, handbags, more than $30,000 in cash, gang paraphernalia, a handgun, a replica handgun and two vehicles used during the crime, the LAPD said.

The incident was one of many ‘follow-home robberies’, a trend that has been gaining popularity among degenerates in the Los Angeles area recently.

Even though Los Angeles is seeing spikes in violent crime, they still make it extremely difficult for law-abiding citizens to obtain concealed carry permits. In fact, it’s near impossible unless you have connections.

To avoid possibly becoming a target of these crimes, pay attention to those around you, including a vehicle that seems to be following you. If you’re walking, walk with confidence and don’t make yourself look like an easy target. Carry other self-defensive tools on you such as pepper spray, a knife, or anything else that’s legal in your area.

And if you do carry anything for self-defense, practice regularly with that item. If you carry pepper spray, make sure you know how it works so you’re not fumbling with it when you need it the most.

Previous article: Man Says "Let's Go Brandon" Live During Santa Tracker Hotline Call, And Biden Agrees Next article: Insane Video Shows Motorcyclists And Driver Getting Into It, And It All Should Have Been Avoided