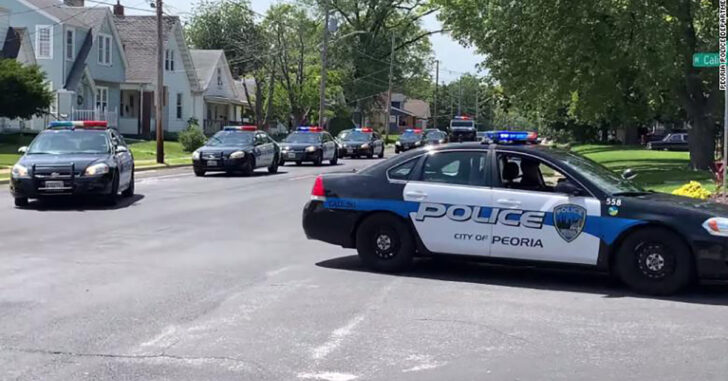 If you’re looking for the type of people who would rob a lemonade stand run by a couple of kids, you’d have to go to the absolute bottom of the barrel. The place where no one looks, because they aren’t going to find anything useful for anyone.

In Peoria, Illinois, that’s what happened. Two young teenagers were selling lemonade outside of their home when two people approached them. They weren’t looking to buy.

Jude and Tristan were selling lemonade in Peoria on August 7 when they were approached by two men, one who was holding a gun, said Officer Amy Dotson of the Peoria Police Department. CNN is identifying the boys by their first names to protect their privacy.

The men stole their cash box, which contained around $30, and fled on foot. The incident is still under investigation and no arrests have been made, according to police.

Four days after the robbery, Jude and Tristan decided to re-open their stand. Many people stopped by to support their venture and offer encouragement.

Then, a force came by to show their support as well.

“A police armadillo truck (a modified armored car) followed by about 15 police cars all with their lights on paraded in front of their stand and parked on the side street. I’m getting teary eyed just talking about it,” Jude’s father said.

“The officers and police chief got out of their cars and talked to the boys and told them how much they supported them. They gave them a donation and took turns buying lemonade. It just made them feel so safe and encouraged.”

Some of the officers paid big bucks for a single cup, upwards of $20.

The Peoria Police Department shared a video on their Facebook page, showing just how many of them showed up in support.

Hopefully, these kids can see that good outweighs the bad in life, and they continue to do what they love and not be stopped by a pair of thugs who have no direction in life.

Tristan told reporters that the support from the community has been great, and contributes that attitude to less crime in the future.

“The robbery itself felt surreal. But the response from the police and community made me so happy,” he said. “I think there will be less robberies in Peoria because of the way we celebrate the good and are proactive about correcting the bad.”

Police have not yet captured the suspects, but they’re searching the bottom of the barrel.