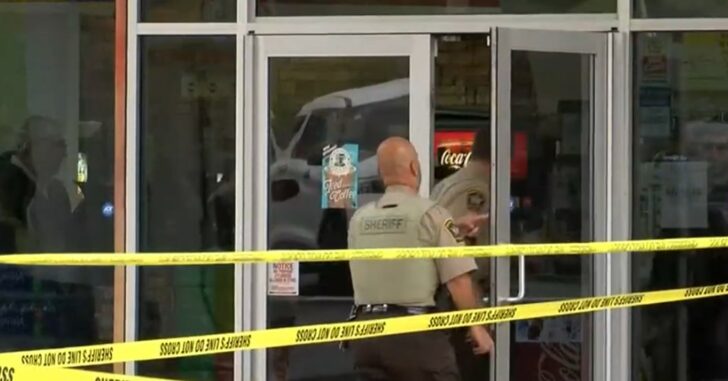 MOUNT PLEASANT, NORTH CAROLINA – An off-duty officer shot one of three robbery suspects who had just shot a sporting goods and pawn shop owner during a robbery Thursday morning. The officer called the Cabarrus County Sheriff’s Office at 10:18 a.m. to report the armed robbery at the Mount Pleasant Sporting Goods and Pawn Store on West Franklin Street around 10:18 a.m.

When deputies arrived the off-duty officer was providing first aid to the wounded business owner. He also told them that the suspects fled in a gray Ford Focus and provided them with the vehicle’s license plate number.

The owner was transported to a hospital for treatment of multiple gunshot wounds and is in serious but stable condition. Deputies learned that the trio entered the store, shot the owner, and were then confronted by the off-duty officer. Sheriff Van Shaw stated, “He came upon a situation where there was an armed robbery going on. He discharged his personal weapon in that process and then rendered aid to the store owner who was wounded in that robbery.”

Two of the suspects apparently dropped off their wounded accomplice at an Albemarle hospital before fleeing into a nearby neighborhood. He was identified as 21-year-old Sean Christian Parker. “One of the suspects was actually reported to the hospital in Albemarle, so they left here and went to Albemarle, there has been ongoing treatment there, nothing so far that we know of that is life-threatening,” Shaw said.

Makari Ridenhour, who was originally named as a suspect in an earlier statement, was charged with possession of stolen goods relating to another investigation and given a $1,000 secured bond. Deputies now say they do not believe that he was involved in this incident and is not facing any charges related to it.  All are currently incarcerated in the Cabarrus County Detention Center.

“Our deputy is fine, he’s doing well, obviously shaken by the whole event and we’re taking care of him,” Sheriff Shaw added.