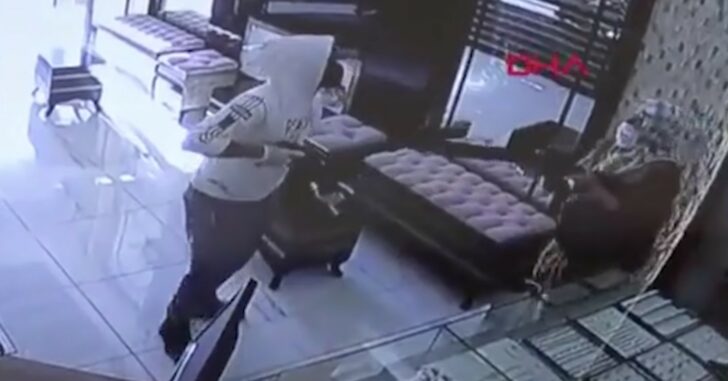 A pair of armed robbers learned quickly that this establishment was not one to be messed with. Not only did grandma come out and point her shotgun, her husband drew his pistol and shot the man, sending him to the ground in a hurry.

The risks were great with this incident, however, because the armed bad guy was pointing his shotgun directly at those people inside, and could have easily ended one or more of their lives.

The lady’s actions were bold, for sure, but luck also played a role because the bad guy could have easily done serious damage if he were inclined to do so.

After bad guy 1 is down, bad guy 2 makes a run for it and grandma gives chase. Staying inside would have probably been the better option, as you never know what awaits you if you give chase.

Her husband kicked the shotgun away from bad guy 1, and held him at gunpoint and maintained some distance.

Overall, this was a successful and somewhat hilarious self-defense encounter.

Previous article: Tampa Officer Sues Sig Sauer After P320 Unintentional Discharge Next article: Is Ammo Safe To Keep Inside A Vehicle During The Hot Summer Months?