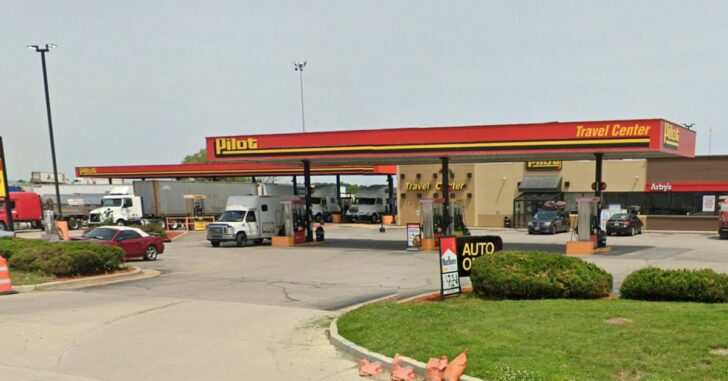 FRANKSVILLE, WISCONSIN — A 22-year-old man was “viciously executed” while pumping gas around 7:30 a.m. Tuesday morning, according to Racine County Sheriff Christopher Schmaling.  The cold-blooded murder happened at a busy Pilot Travel Center in the village of Celedonia.

The 32-year-old gunman then shot at another person driving through the parking lot – fortunately, missing his mark – before speeding away. He then drove to a Mobil station about 2 miles away and approached another man who was pumping gas into his vehicle.

That man was an undercover investigator and 21-year-veteran of the sheriff’s department. The two exchanged gunfire, with the good guy hitting the mark multiple times, which proved fatal for the suspect. The investigator was also wounded and transported to a hospital in Racine, where he was conscious and alert.

Sheriff Schmaling commented, “It should be noted, ladies and gentlemen, this is 7:30 in the morning at this Mobil station. It was bustling with activity. People getting their gas. People getting their morning cup of coffee. There is no doubt in my mind the quick, heroic actions of our investigator saved lives today.”

Schmaling also said that he had viewed the video of the first shooting at the Pilot and described it as a “vicious execution.” He did not disclose the names of the suspect or his victims but did say the gunman was from Hartland and his first victim was from Elkhorn. There was no mention of a possible motive, and the investigation is continuing.

Once again, we see a deadly encounter occurring in a split-second, in broad daylight, in a highly traveled area, and without any warning whatsoever. The first victim was unable to defend himself. The seasoned law enforcement officer was able to not only able to engage the threat, but also successfully eliminated it. To do so required situational awareness, extensive training, split-second reaction, instantaneous access to his firearm, and solid shooting skills. His actions undoubtedly saved not only his own life, but the lives of many other potential victims.

Think about the last time you put gas in your vehicle. Were you armed or was your firearm inside your vehicle? Were you totally aware of everything and everyone around you, or were you checking your phone, watching the display on the pump, looking down at the nozzle or otherwise occupied by something else? Did you have a clear escape route to good cover, or was the filler hose or some other object blocking your path?

Unfortunately, extreme evil co-exists even with everyday “low risk” activities. Are you prepared to deal with it? It’s one of the reasons why we carry.

Previous article: Man Fired From Job, Goes On Shooting Spree And His Targets Miraculously Escape Unharmed Next article: Gun Sales Continue To Break Records During First Half Of 2021