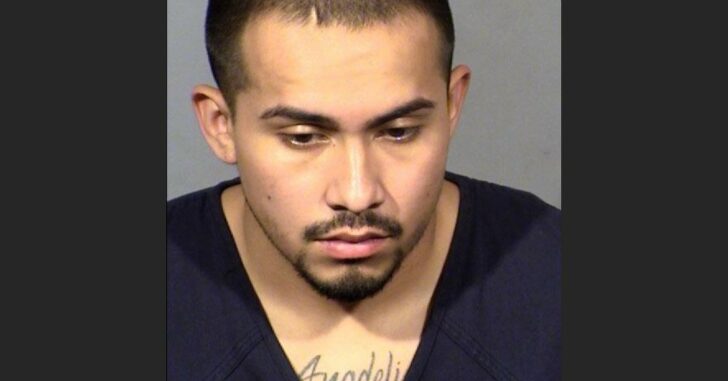 LAS VEGAS, NEVADA — If there were ever a case of ‘you need to get your sh!t together before you kill someone’, this would be it. A regular at a bar, identified as 24-year-old Anthony Balderas, was doing his regular thing early Sunday morning. He entered the bar around midnight, and another man entered around the same time.

Both were regulars, and police say the two didn’t have any negative exchanges all night after reviewing surveillance footage.

Still, Balderas walked up to the victim and shot him in the back. The victim was identified as Timothy Hartley.

Around 3:10 a.m., surveillance footage showed Balderas make a gesture to Hartley with his glass, like a “cheers.” Hartley was on the phone at the time and Balderas was at his seat, holding a pistol, the report said. At 3:18 a.m.,  Balderas walked toward Hartley, who was facing away from him, with pistol in hand. Balderas pointed the gun at Hartley’s back and fired one shot, the report said. Police said Balderas then “calmly walked out of the bar” to his vehicle.

Hartley was taken to the hospital, but was pronounced dead shortly after.

The twist: Balderas is adamant that he doesn’t remember anything that happened.

Balderas said he remembered using the bathroom and planning to go home but didn’t remember leaving the bar or driving home, the report said. Then he remembered police coming to the door.

Police said that after watching the footage, Balderas apologized for what he did and could not give any explanation as to why he shot Hartley.

First problem: Balderas was carrying a gun while drinking. It is unknown whether or not Balderas was in legal possession of the handgun, outside of the obvious illegal action of carrying while intoxicated.

Second problem: No one noticed the gun in Balderas’ hand.

Third problem: A bartender told police that Balderas was a regular and didn’t seem himself that night. Could that be a clue to cut off Balderas from anymore drinks? I don’t know, I’m not a bartender.

There are usually signs that trouble is coming, they just have to be noticed and action taken.