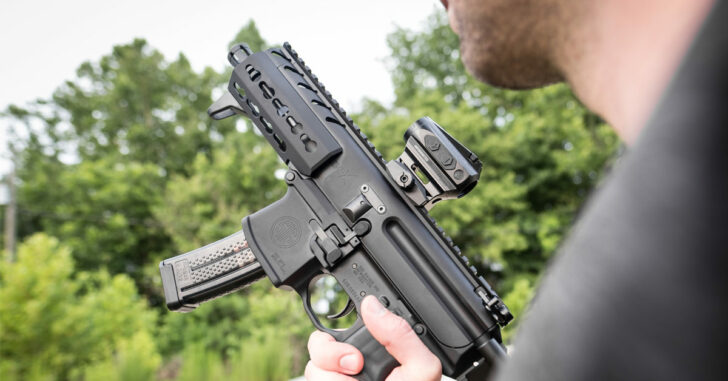 Ever since the old days of gun racks in trucks, truck guns have been a thing. It could be a shotgun, a bolt-action rifle, or any other longer gun that, when needed at a moment’s notice, is right there in the hands of the operator.

But truck guns have changed. It’s not just a family pump shotgun or an old Winchester hunting rifle — it’s now evolved into a whole series of short barrel rifles, pistols, and optics.

A person who makes the willful decision to arm up before he steps foot out the door likely has an understanding that concealed carry is just an immediate life line. It’s the tool you can easily conceal so you can get to safety in a life or death situation.

However, for a real fight against a determined foe, a truck gun is that next step. Often times a semi-automatic rifle chambered in .300 BLK, 5.56 NATO, or even 9mm, these semi-automatics are designed to conceal well, take up as little space as possible, and ensure that a person can “reach out and touch” the bad guy if he has to.

Don’t worry if you don’t own a truck or an especially large car in general. In this article, we’ll go over some ways to choose a truck gun. And don’t worry, we won’t go overboard. Yeah, that one will turn some heads…

So, what are some considerations when picking out a truck gun?

Application refers to the likely situations you may be forced to deal with. If you’re living out on the prairie, you may need to reach out and knock down some predators hunting your flock. A long range bolt-action rifle or something with an advanced optic may be a great choice.

However, if most of your days are spent jumping from the city to a rural environment, you may need a gun that works well in short to medium range situations. A 16 inch barreled rifle may fit in your vehicle of choice but you may also need something you can stow away into an even tighter area.

That’s where short barreled rifles and pistols earn their keep.

Not necessarily anyone’s first choice for sniping prairie dogs, these short barreled firearms can have barrels as short as nine inches. Short barreled pistols, however, are not under those restrictions. They can be equipped with the same style of magazines as their rifle counterparts and still run great. Many come with a stabilizing brace that can be secured to your arm for a better degree of stability.

And some people honestly will keep a full-sized 16 or 18 inch AR or AK platform in their vehicles. For many that I’ve spoken with, it’s the instantaneous gratification of being able to respond to near any situation. Decisiveness and security — it’s a big thing.

If you’re going to keep a truck gun, it’s a good idea to keep it locked and out of view. Some people put their truck guns in their trunk — I guess this would technically make it a trunk gun but let’s not get into it. A trunk compartment can be a great way to secure firearms, magazines, and additional equipment that a person may feel he needs at the ready.

Depending upon the size of the gun, you can even get a locked compartment placed under your seat or under the rear seats if they pull forward.

The basic premise is this: if you have a truck (or trunk) gun, you need to be able to secure it so it cannot be easily seen and taken by a bad guy.

The worst feeling in the world is the thought of walking back to your vehicle to see a bad guy arming himself with your gun.

Lock’em up. Keep’em out of sight. This could be your last ticket out of the station in a rough scenario — treat it like such.

Previous article: I Am a Mom & I Am Armed Next article: #DIGTHERIG - Oden and his Glock 19 in a Trex Arms Holster