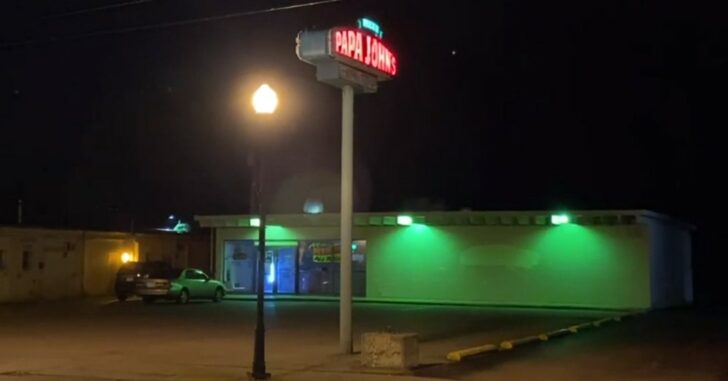 NEW CARLISLE, OHIO – An armed robbery suspect was shot and killed by an armed person who was inside the business, according to the Clark County Sheriff’s Office.  Major Chris Clark said that two people entered the Papa John’s pizza store on North Main Street in Carlisle. One of the two was fatally shot and has been identified by the Clark County Coroner’s Office as 21-year-old Gage Melton. His cause of death and hometown have not been made public.

A person in the business who called 911 told the dispatcher, “They came running in with weapons and tried to rob us. One’s shot and wounded on the floor, one of them ran out. They had weapons, the one had a big crowbar and the other one looked like a knife, and they were sprinting toward us.”

The suspect who was not shot fled on foot and remains at large. Sheriff’s investigators have not disclosed who fired the fatal shots, but during the 911 a man could be heard in the background call saying that he was a CCW permit holder. That has not yet been confirmed by officials.

New Carlisle and Bethel Township medic units were called to the scene, and the Ohio State Highway Patrol was called to assist at the scene. At last check with the Clark County Sheriff’s Office, no charges had been filed in the case.