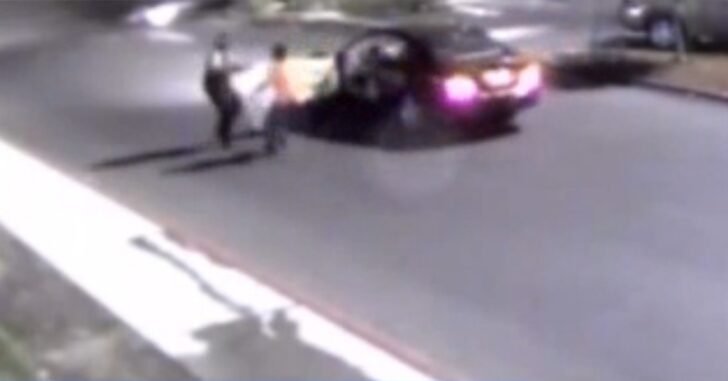 MADERA, CALIFORNIA – A man who approached a couple’s vehicle was shot by the wife after he attempted to attack the husband with a knife. Madera Police investigators used surveillance video from the Walmart where the incident occurred to corroborate the couple’s story. “In this case, the surveillance video really helps tell the story,” says Madera Police Commander Gino Chiaramonte.

A man is seen approaching the passenger side of the couple’s car stopped car on foot. Within seconds, the man driving gets out, and the other man comes around the back of the car and charges the husband with an edged weapon.

The driver retreats backward across the street in an attempt to avoid the suspects efforts to wound him. At that point, the wife sprang into action in defense of her husband. “The wife stepped out of the vehicle and shot one round, striking the suspect/victim in the throat,” Chiaramonte said. The suspect was transported to the hospital in critical condition.

A witness identified only as AJ was a few parking spots away during the incident. “I don’t know what the arguing was about.  It all happened pretty quick. It was really scary because the shot was really loud. It was just one shot. It was one shot. That’s it.”

According to police, the couple has been cooperative with the investigation. They went to the police station for questioning and were released afterward, and police say they have no intention of pursuing charges against the woman responsible for the shooting.

“It’s not a defense of her but it’s in defense of her husband,” Chiaramonte said. “There was a lethal threat and the aggressive nature of him trying to swing and stab, and you’ll see that in the video.”

“It’s not case closed yet,” Chiaramonte said. “We are doing a lengthy investigation into the histories and trying to figure out what could’ve caused this in the beginning.”

The suspect is in critical condition at Community Regional Medical Center and police are hoping that he will provide more answers about the initial confrontation. They have not speculated on any charges that he may face.

Previous article: Multiple Dead Inside Colorado Springs Community, Suspect Believed To Be Among The Dead Next article: Why We Carry: Horrific Execution Of Woman By Her Ex-Boyfriend Shortly After Breaking Up