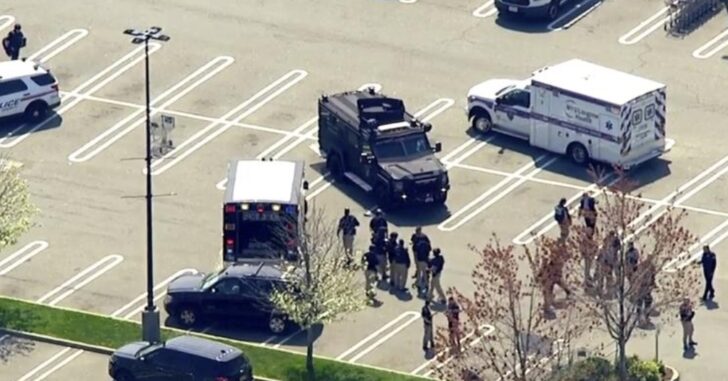 WEST HEMPSTEAD, NEW YORK – An employee reporting for work fatally shot a manager and wounded two other co-workers Tuesday morning.  Police were called around 11:15 a.m. to the Stop & Shop supermarket. Four hours later, they arrested Gabriel DeWitt Wilson, 31, at an apartment building about 2 miles from the scene, according to Nassau County Police Commissioner Patrick Ryder.

Wilson was a shopping cart wrangler at the store. He had been reprimanded in recent months for threatening and sexually harrasing co-workers, according to police. After arriving for work, he went straight to the store’s offices on the second floor, where he had a discussion with a manager about transferring to another store, and about 40 minutes later he opened fire. He shot and wounded a man and a woman in one office, then went down the hall and fatally shot a 49-year-old store manager, Ryder said. He fled westbound on Hempstead Turnpike wearing all black and carrying ‘a small handgun’.  Ryder added that there were a “couple hundred” shoppers inside the store at the time, he said. The names of the victims have not been made public. The two wounded were hospitalized and were conscious and alert.

Tips from the public led officers to zero in on an apartment building about 2 miles away in Hempstead, where a tactical team arrested him without incident. He was arraigned Wednesday on charges of homicde and attempted murder, and ordered to be held without bail. His attorney, Brian Carmody, declined comment on the charges, but did say that Wilson still suffers the ‘lingering effects’ of being shot in the head at the age of 19.

Oddly enough, Wilson has a criminal record and had been taken into custody for a mental health evaluation previously in Nassau County. Court records indicate that he was involved in a shooting in Baltimore seven years to the day before Tuesday’s supermarket shooting. In that incident, Wilson and another man fired shots at each other, and both were hospitalized with lower body wounds. Wilson was charged with attempted murder charges which were later dropped, records show. He also has numerous arrests for drugs and assault.

Stop & Shop President Gordon Reid, via a statement, that the company is “shocked and heartbroken by this act of violence” and that the location will remain closed until further notice. “Our hearts go out to the families of the victims, our associates, customers and the first responders who have responded heroically to this tragic situation,” Reid said.

Nassau County Executive Laura Curran told News that the shooting was “one of the most serious incidents we’ve had in a very, very long time.”

Governor Andrew Cuomo said he was directing state police to assist local police, adding, “I’m praying for the victims, and my heart breaks for their families and loved ones.”

Previous article: Man Gets Lucky While Defending Himself With Gun Against Multiple Invaders, With No Round In The Chamber Next article: Man Fatally Shoots Homeowner, Then Fires on Responding Officers Who Fatally Shoot Him