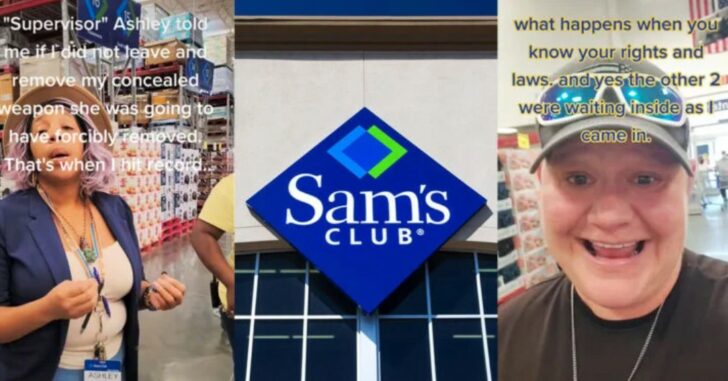 A woman was kicked out of Sam’s Club for carrying concealed but then allowed back in after the store manager called corporate.

The doorman noticed the gun under her shirt and alerted other employees. Two female employees confronted the woman and asked her to leave and remove the gun. And this is where the videos the woman posted to TikTok pick up:

@goatvillagenc Supervisor Ashley in Sam's Club Kannapolis NC attempted to threaten me, attempted to hold me, escorted me with 3 people & then had to eat crow. Know your rights and know your laws! another video to follow Do better #samsclub #NC #laws #2ndadmendment #concealcarry ♬ original sound – Miska R

@goatvillagenc follow up video being escorted and showing what THEIR door says! She was not happy but rules are rules and laws are laws! #concealcarry #2ndadmendment #laws #samsclub #knowhowtoread #eatcrow #USA #NC #northcarolina ♬ original sound – Miska R

After the woman showed the store manager the sign, the manager called corporate, who reportedly got angry that any employees even approached her. She was then allowed back into the store to show with her concealed carry gun.

@goatvillagenc Laws and 2nd amendment for the WIN! we must stand up for what is our legal right!#NC #USA #constitution #northcarolina #2ndadmendment #samsclub ♬ original sound – Miska R

I’ll start by saying that I think the woman in the video being asked to leave was correct. She was legally allowed to carry there and followed all the rules that the store had posted. But I don’t think making a scene is the best route to take if something like this happens to you. If you are asked to leave by a business and don’t, you could then be trespassing and charged for it. Don’t cause a scene and leave the business.

Also, to me, concealed carry means concealed. Draping a tight-fitting shirt over your open carry handgun is not concealment. I can understand why the woman in this video did what she did. But when you carry concealed, no one should be able to see it. Some people say printing doesn’t matter. In my opinion, it does. So if you are going to carry concealed, keep it hidden.