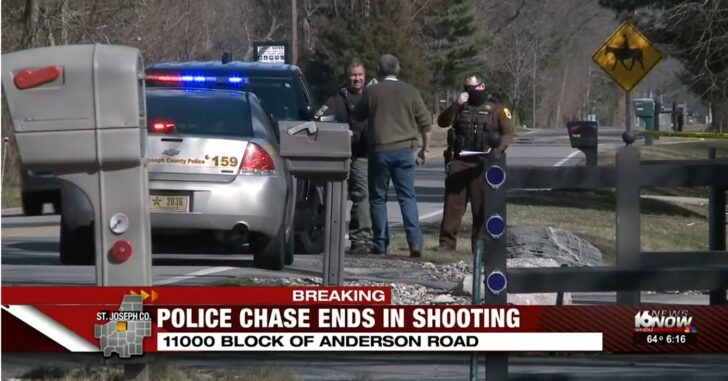 GRANGER, INDIANA – A homeowner shot a suspect that he found hiding from police in an outbuilding on his property, according to authorities. St. Joseph County Police arrived on the scene in the 11000 block of Anderson Road in Granger to find the man shot once. He was transported to a local hospital and expected to recover.

The story began twenty miles away in Goshen, when the suspect led police on a chase through Elkhart, Dunlap and Midway, then into Granger.  He ditched his car near the intersection of Bittersweet Road and Cleveland Road, then fled on foot into the area of Anderson Road. At some point after that, a homeowner found the suspect in an outbuilding and fired one shot at him.  St. Joseph County Police arrived on scene shortly thereafter.

Officers at the incident scene did not discharge their weapons and no one else was injured. Even though there was no report of a homicide, due to the involvement of the multi-agency pursuit and injury to this individual, per protocol, the St. Joseph County Metro Homicide Unit was activated and is currently handling the investigation.

This shows that you should be prepared to deal with any threat, anywhere, at any time. Imagine strolling out to your backyard storage building on a Sunday afternoon to get a lawn chair or two, only to find a dangerous suspect hiding from police when you open the door. That person could be armed with a weapon belonging to them, or with an improvised weapon found in your building, such as a machete or hornet spray.  Are you physically and mentally prepared to deal with an unexpected and potentially deadly threat in a split second and when least expected?

Previous article: Delivery Driver's Death Captured On Video, His Killers Were A 13 and 15-Year-Old Girl Attempting To Steal His Vehicle Next article: Man Kills His Parents, Drives To Store And Guns Down Shoppers, Then Sets His Apartment On Fire