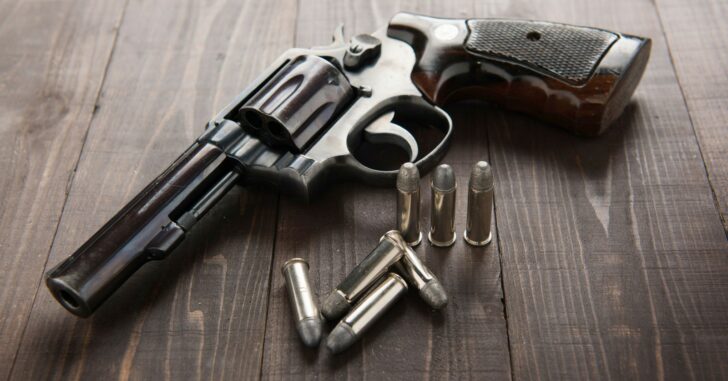 WEATHERFORD, TEXAS — A 67-year-old woman who caught two men in the act of burglarizing her family’s property held them at gunpoint with her revolver until help arrived.  Police say that they received a call of a burglary in process just before 8:30 a.m. on December 22nd.  When they arrived, she found the woman well in control of the situation.

She told police that she and two other people arrived home and saw a vehicle in her driveway that she did not recognize. Police did not provide details on the chain of events but did say that the men were caught in a building on the property, adding that the woman’s friends helped to detain the suspects.

Police did not say if the woman had a concealed carry permit, but added that it would not be required, since the incident occurred on private property. Following the arrests, the stolen property was returned to the woman by police.

Alexander Fabian Deras, 23, of Haltom City, and Eric James Trevino, 39, of Haslet were booked into the Weatherford Jail on Thursday in lieu of $15,000 bail each, and face charges of burglary of a building. Trevino also is being held on drug and firearms charges out of Tarrant County.

It would appear that any thoughts that the two may have had of making a run for it were quickly dismissed by the woman’s actions and demeanor, and she left the crooks with no doubt that she would use her gun if they tried.  If you plan to carry a gun, you should have enough training and practice with it to project confidence if you are ever required to draw it. Often just the sight of a firearm is enough to stop a criminal in their tracks, but you must know what to do, and be mentally and emotionally prepared to do it if they are non-compliant, combative or respond to your challenge with equal force.

Previous article: Armed Robber In Iraq Doesn't Know He's About To Become The Victim Next article: Man Shoots Friend At Gun Range, Is Then Fatally Shot By Bystander