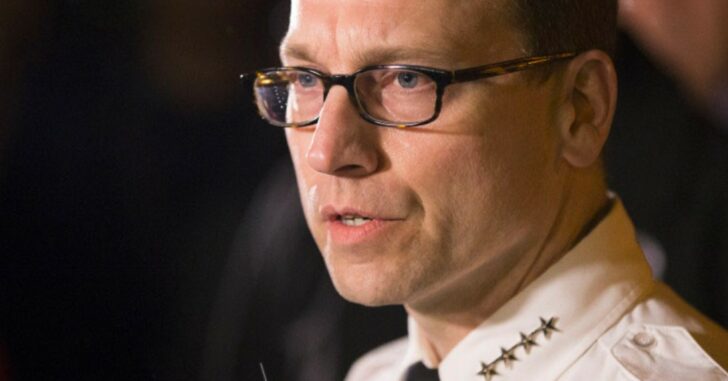 Nine Prince George’s County Maryland police officers burst into a Forestville apartment Wednesday night to serve a warrant against a suspected drug dealer who’d been fingered by a confidential informant. Unfortunately the cops had the wrong address.

“We served the search warrant at the address that we identified through the investigation, however the investigation led us to the wrong address,” (Police Chief Hank) Stawinski said. “The individual that we are targeting does not live at that address . . . a law-abiding, hard-working citizen of Prince George’s County and his daughter were home at the point where we were executing that search warrant.”

The homeowner and his daughter were asleep at the time.

Hearing no response from inside, police began using a device to pry open the door to the unit, Donelan said. The man inside fired a shotgun at the team “as soon as they were able to open that door,” Donelan said.

An officer fired back but didn’t strike anyone inside the apartment, Donelan said. Two officers were wounded, one in the shoulder and one in the hand.

Two cops were wounded, neither seriously. It’s a minor miracle that the nine officers didn’t open fire, killing everyone in the house.

As soon as officers entered the apartment, the man inside immediately surrendered when he realized police were on the other side of the door, Stawinski said.

The man yelled, “‘You’ve got the wrong address! Don’t shoot my daughter!’ ” according to Stawinski.

Perhaps more remarkable has been the response of police and prosecutors following the incident.

Stawinski said that he conferred with Prince George’s County State’s Attorney Angela Alsobrooks and that both agreed that the resident would not be criminally charged in the shooting.

In addition, Chief Stawinski has stopped executing all search warrants in the county until they conduct a review of the process used in gathering information and confirming the addresses of their investigative targets.

The chief said he wants to see a “broader representation of those methods than what we saw in this case.” … The chief also said disciplinary measures and departmentwide policy changes could result from the review.

This is how all of these wrong-address situations should be handled. A homeowner facing a night time invasion of his home has virtually no opportunity to determine who it is that just kicked in his door. The individual here reacted naturally and prudently in defending himself and his daughter. No one should be charged for shooting police officers when defending his life and family in good faith.