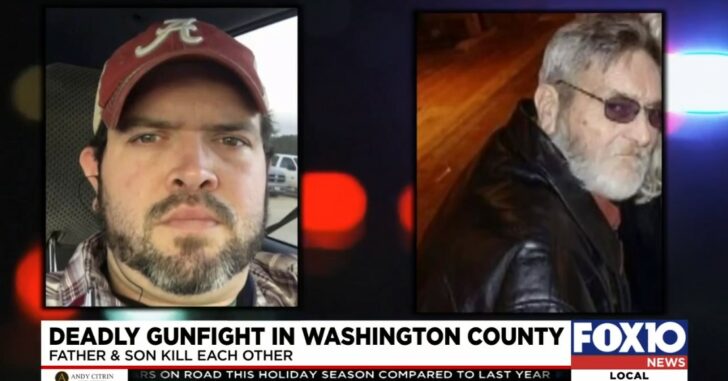 WASHINGTON COUNTY, ALABAMA — A disagreement over a dog ended with a father and son dead after they fatally shot each other on December 19th, after the son told the father he killed his dog.

According to the Washington County Sheriff’s Office, Nicholas Cooker, 32, witnessed four of the the family’s dogs playing aggressively with his girlfriend’s child around 6 p.m.  Coker began shooting at the dogs, killing two of them. One was his and the other belonged to his father.

Blake Richardson, chief investigator for the WCSO said “His brother said, ‘Dad is going to be upset that you killed his dog,’ and Nicholas allegedly pointed the shotgun at his brother and using choice language, more or less told him to get off his property or he would kill him.” The father of the men, Kelvin James Coker, 60, arrived home moments later.

Nicholas pointed the shotgun at his father, who was still seated in his vehicle. The elder Coker grabbed his handgun and fired a shot, striking his son in the torso. Nicholas returned fire from the shotgun, hitting his father in the neck.

The father died instantly, and the son died a short time later. “It’s unfortunate that they would not value human life… any more than that,” Richardson said.

The WCSO said that the family has a troubled past, and that they have responded to numerous incidents over the years at the Coker property, including one last week. In 2012, Kelvin Coker was charged with first-degree assault after shooting his other son three times in the arm.

Many times, we can use incidents as teachable moments, but there’s nothing to learn here…just an example of how immature and thoughtless actions can destroy a family from within.