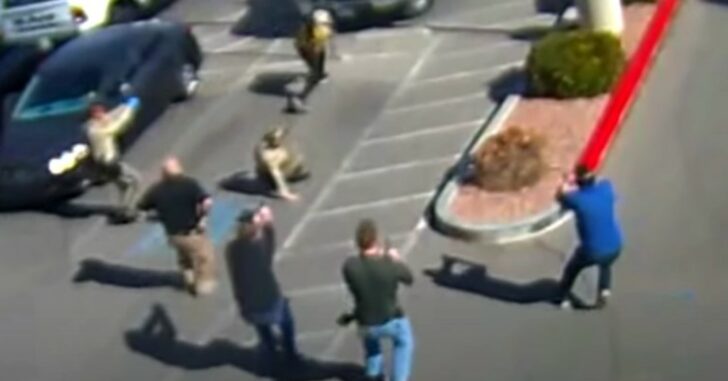 Police in Las Vegas released video of the death of a would-be thief who tried to steal a handgun from a bag under a table in a concealed carry class. Marvin Payton then attacked a pair of responding officers with a screwdriver, stabbing a female cop. That’s when her partner and three of the class instructors opened fire, shooting Payton fourteen times.

It all started with Payton wandering into a concealed carry classroom at Range 702 in Las Vegas. He sat down and started pawing through one of the students’ bag while most of the class had stepped out during a break.

Fortunately, the bag’s owner returned with other class members and confronted the thief.  The class instructors ejected Mr. Payton and notified police. The would-be thief lingered outside and the instructors waited outside with him to make sure he didn’t re-enter the building. That proved quite fortuitous.

Here’s the police briefing on the incident. The video of what happened in the classroom and the subsequent shooting outside starts at the 5:28 mark.

The San Francisco Chronicle had details . . .

Police Officer Andrew Nguyen fired nine shots. It was not clear how many shots the employees fired, Zimmerman said.

The injured officer was treated at a hospital and is recovering from stab wounds and a broken facial bone. Her name wasn’t made public.

Nguyen, 34, a police officer since 2018, was put on paid leave pending departmental and district attorney reviews of the shooting.

Police praised the three good Samaritan instructors who intervened along with the second officer to stop the attack.

Once more, the only thing that stops a bad person with evil in their hearts is a good guy with a gun. That’s not something the gun control industry likes to acknowledge, but they’ll just have to live with it.

Previous article: Ammo.com To Purchase Gunbroker.com Auction Site For $240 Million Next article: Why We Carry: Woman Gunned Down By Man Outside Home As Officer Arrives