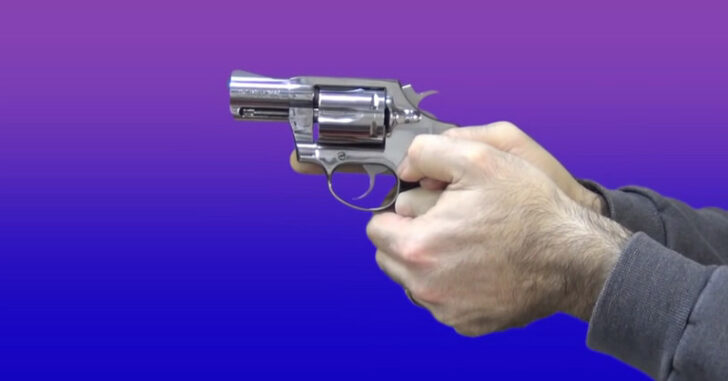 While a lot of emphasis tends to get pushed towards semi-automatic pistols, there’s more to being a concealed carrier than just a pistol.  Revolvers have historically and continue to be a great asset.

We’ve enclosed a video from TheYankeeMarshall in which he discusses holding a smaller J-frame style revolver because he probably has one of the best explanations to date for these techniques.  He goes over a few techniques in that video that may work for many concealed carriers.  Definitely worth a watch. This is a pretty common way to hold a concealed carry revolver because it’s what comes naturally to a lot of shooters who’ve used a pistol.  The supporting hand’s thumb rests across the lower frame, beneath the cylinder. The supporting hand is basically reinforcing the primary hand shooting the revolver.  The thumb can be folded over the shooting thumb so as to help steady the firearm.  It’s a big problem with smaller J-frames and smaller concealed carry revolvers in general where there’s a hard time finding a place to put the other hand.  We’re always taught to shoot with both hands – but what if the gun you’re firing doesn’t support that? While the tea cup grip is generally boo-hoo’ed for semi-automatic pistol carriers, it’s perfectly fine and reasonable for smaller concealed carry revolvers.  For larger revolvers, it can still be effective so long as the weight of the revolver can be steadied by a single hand.

Does this cover all the possible variations of ways you can safely hold and discharge a smaller concealed carry revolver?  No.  But what it does cover are the three major ways in which you can practice.  Truly, the only way to know which technique works best for you is to, indeed, practice them.

Controversial Revolver Techniques That Need To Be Verified

Chris Cerrano discusses an alternate way to steady one’s grip on a larger revolver.  He places the thumb of his supporting hand on the shroud of the cylinder to steady it.

This has, for some reason, been a more controversial posture because some argue the impact on that thumb may be too much to handle.  Truly, it seems a bit riskier from the outset and really the only way to determine the validity of it is to try it… Something we’ll inevitably need to make a video of and yours truly will get back to you on.

On the surface, this technique appears to have some merit – as the additional pressure appears to help steady and keep a larger revolver on line.  For smaller concealed carry revolvers or options where the shroud either doesn’t adequately cover or just doesn’t appear to cover completely, this is not at all recommended.  And for revolvers without a shroud, this is certainly a horrible idea – but most revolvers do contain a shroud of some sort.

Never Grip Any Revolver In Any Way That Compromises Your Hands

Removing these options from the equation, there’s a lot left to experiment at the range – in a safe environment.  Only experience will tell you the right grip for your concealed carry revolver.