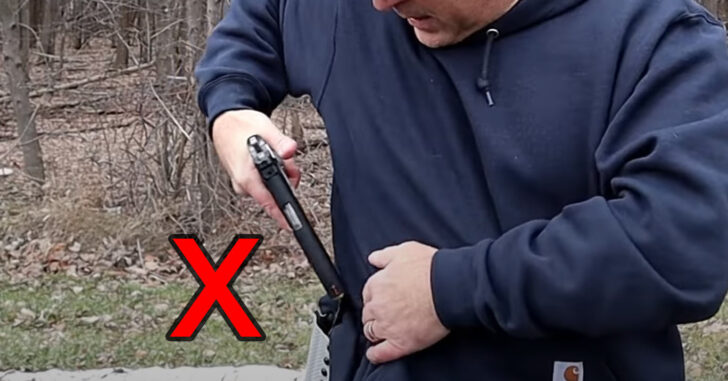 Holstering a handgun is a simple task, right? Well, there is more to it than what meets the eye. Traditionally, we think, if the gun is holstered and nobody gets shot, it’s a successful task. But is it? As concealed carriers, we need to be assured that everything we practice and train for has the greatest amount of safety involved. Performing any firearm skill should include safety measures. Holstering a handgun is no different. Do not forget that one of the firearm safety rules is to never point a gun at anything you are not willing to destroy!

Recently, I reviewed the Springfield Armory Ronin 1911 in 10mm. I performed a few draw and shoot drills on video. As I holstered the pistol, I noticed the muzzle was pointed directly at my hip. The 1911 thumb safety was engaged however it still broke a safety rule. I have taken several defensive shooting training classes. I cannot recall practicing a correct holster drill. We tend to think as long as the pistol is holstered, with nobody getting shot, it’s all good. But, isn’t there a better way to holster without flagging yourself with the muzzle of the gun?

In the video attached, I demonstrated what I did wrong and what I am doing to correct it. A firearm instructor reached out to me with some helpful tips. With a better understanding along with practice, I am now holstering a handgun more safely. A few simple tweeks in the holstering motion is all it took. By simply putting my pride aside and be willing to learn a different method, I now holster a pistol without flagging my hip. I truly believe this topic is underrated and often not covered.

Check out the video and let us know your thoughts on holstering a pistol. Is the methods used something you will implement in your CCW lifestyle?

Previous article: Sobering Video Reminds Us To Pay Attention To Our Surroundings. This Man Unfortunately Didn't Do That. Next article: Home Invasion Leaves 2 Suspects Dead and 2 More Charged with Murder After Homeowner Opens Fire in Self-Defense