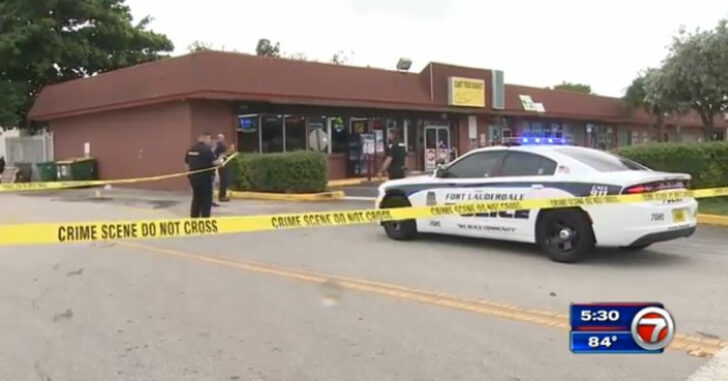 FORT LAUDERDALE, FLORIDA — A business owner opened fire on an armed robber after the robber entered his store and demanded money from the cash register. Multiple witnesses at the scene said that the robber attempted to rob customers and the cashier indiscriminately before the clerk opened fire. The armed robber was hit multiple times but managed to shoot the clerk before escaping.

According to WSVN News 7 Miami, the armed robber made it several blocks before collapsing due to wounds incurred in the shootout. Thankfully, the clerk only suffered a graze from a bullet passing by him. No one else was injured in the exchange. The Fort Lauderdale Police quickly secured the scene and offered their statement to WSVN.

According to another employee at the scene, the store clerk that opened fire was the son of the business owner. The convenience store was a family-run business and the son didn’t want to just stand idly by while his customers and his store were robbed.

The suspect was taken into custody and treated for multiple bullet wounds in his torso. He is expected to survive and face charges. In addition to the attempted robbery, possession of an illegal firearm, he will also be tried for shooting at the clerk and endangering the lives of those nearby.

The clerk was treated for his wound and released. The family-run business has no further comment on this incident.

Incredible. That armed robber thought he could just walk into a convenience store and endanger the lives of everyone in the hopes of a few hundred bucks. He didn’t care. Not his problem. But for a family-run business, it is very much their problem. Not only is there the superficial reputation of being a location that is vulnerable to attack, there is also the very real danger that someone would be shot and killed for failing to comply.

This store clerk removed his business from the list of “safe spaces” for criminals to rob and act violently. And now there’s one less violent, armed criminal on the streets as a result. We’ll call that a win.