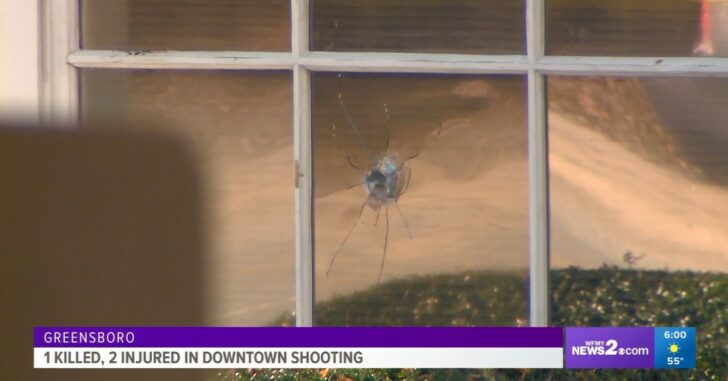 GREENSBORO, NORTH CAROLINA – A shootout that occurred around noon Monday in front of the Guilford County Courthouse Monday has left one man dead, another in critical condition and a third with non-life-threatening injuries.

Officers from both the Greensboro Police Department and the Guilford County Sheriff’s Department responded to the location at 201 South Eugene Street in downtown Greensboro, arriving to find three men suffering from gunshot wounds. One had non-life-threatening injuries and two were transported to local hospitals, where one was listed in critical condition and one was pronounced dead.

The gunfire exchange, which occurred near the courthouse entrance, shattered glass at the nearby Sheriff’s Office.  GCSO Public Information Officer said that no one inside the building was injured, and that it appeared to be stray bullets from the shooting rather than intentional.

Greensboro Police Chief Brian James believes that the shooting was not a random act. “It’s hard to say, I would say preliminarily it looks like it was targeted but we are following up on information to confirm that but it certainly would be unusual for a random act like this to occur in broad daylight.”  He added, “This is absolutely insane that a shooting happened downtown in broad daylight while people are going to work.  People are just trying to live.  It’s concerning.”

The deceased has been identified as 20-year-old Avion Imeen McLean of Laurinburg, a North Carolina town about 100 miles south of Greensboro. Identities of the other victims have not been released, nor has a motive or a description of any suspects.

Any innocent bystander could have been a victim of a stray bullet, and it’s why we always talk about situational awareness and thinking of ways to get yourself to a safe location, if you were to find yourself in the middle of gun shots.

Previous article: 1 Year With Appendix Carry. Is It Worth The Change? Next article: Daughter’s Boyfriend Breaks into Home Before Brutally Slaying Her Father During 911 Call