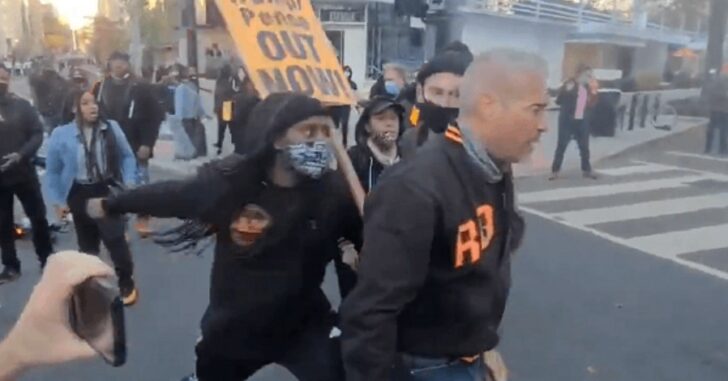 WASHINGTON, DC — Protests got heated when it is reported that Trump supporters were attacked as they tried walking down the street.

A group of leftist protesters attacked numerous Trump supporters who had finished taking part in a rally on the streets of Washington, DC, on Saturday. In one of the most graphic attacks, a man who tried to fight off an attack is hit from behind while at least two women kick and stomp his head.

The attack was captured on camera, showing one man being knocked out from behind and then multiple women can be seen stomping on his head as he lay on the ground.

At the beginning of the video, a few people can be seen walking down the street away from the crowd, but a few of those people in the crowd continue to follow them and assault them.

Then, a man with a megaphone is confronted by the man who is eventually knocked out. What led to that particular confrontation is unclear, but it would seem to be in defense of the other people who were being attacked.

If you notice at around 1:28 in the video, some opportunistic peaceful protesters took a moment to steal the fallen man’s cell phone.

In DC, it’s not likely that one can legally carry a firearm. I have to point that out because we’re a concealed carry website. BUT the real thought on that topic; I won’t have to worry about carrying or not, because I won’t be there participating.