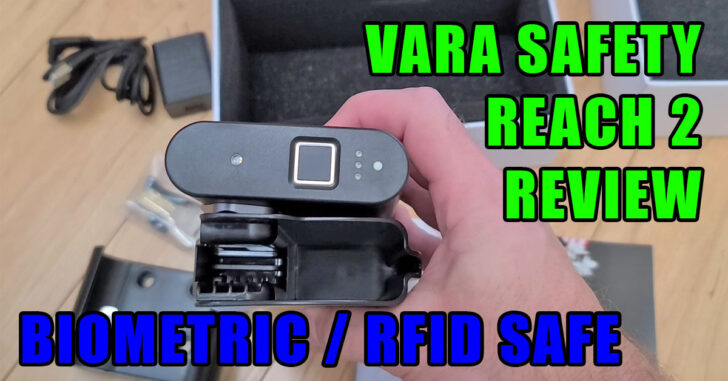 Since nearly the beginning, I’ve been working with them because I believed so much in the product, and still do. Even more now, after seeing what they’ve done with version 2.

The Reach 2 is being called a Holster Safe. The handgun sits in a holster sleeve, and it’s attached to a biometric safe. So yea, Holster Safe.

It’s a quick-access device that gives you security, while at the same time allowing authorized users access to the firearm in half a second. It really is that fast, and it’s insanely accurate as well.

An accessory that’s a must-have for some is the RFID package, coming in at $19.99 and providing a few different options for RFID unlocking. Just throwing this out there, because it’s a really nice feature that many will enjoy.

HOW DOES IT WORK

In a nutshell, the device locks your handgun in place, and it’s not going anywhere. The safe itself is locked into a base, which in turn is mounted onto a hard, flat surface. They have an addition to the base to make it even more secure that can be purchased separately, but I don’t find it necessary if you’re using bolts to mount the base.

The video below will give a clear picture of how it operates, and you can see how quickly the fingerprint reader works on this new version. I can’t stress it enough; it’s insanely quick.

HOW IS IT POWERED

The device is plugged into the wall via an AC adapter. Aside from that, it also has a battery that can provide up to 6 months of usage, in case the power goes out. That’s a huge improvement over their last battery, by the way.

HOW DOES IT UNLOCK

There are multiple ways to unlock the device. The main two are: via Fingerprint and via RFID.

If all fails, there’s a key provided that will unlock the bottom of the unit and allow you to retrieve the firearm.

The device will store up to 20 fingerprints, including a master fingerprint. You can also set up multiple RFID tags.

WHERE DOES IT MOUNT

These things are being mounted all over. The most common places are:

The choices are endless, as long as it’s a flat and hard surface that you can drill into. People can get pretty creative with it.

WHO IS IT FOR

The top target for a product such as this would be a home with children. It’s a great way to maintain quick access to your firearm while keeping it secure.

But it’s really good for anyone. I have one mounted on my desk in the office, and another in the bedroom.

Biometrics mixed with firearm security is something that’s evolved quickly over the last few years, and the technology is extremely advanced at this stage. The biggest concern that people have: What happens if the fingerprint reader fails when I need it to work the most?

Well, I’ve sat here for hours now, just locking and unlocking the device. It’s failed me twice, only because I placed my thumb in a ridiculous position, not even on the reader. Aside from that, it’s been absolutely flawless.

The Reach 2 is an option for anyone who wants to secure their firearm but have less than half a second access to it. It’s really that simple. If you want piece of mind, and a product created by an amazing team of people, the Vara Safety Reach 2 might be what you’re looking for.

Previous article: Guess What The Top 5 Guns Sold In Your Area Has Been So Far In 2020 Next article: You Can't Shoot Someone In The Back If They're Retreating, Even If They Were The Aggressor (Usually)