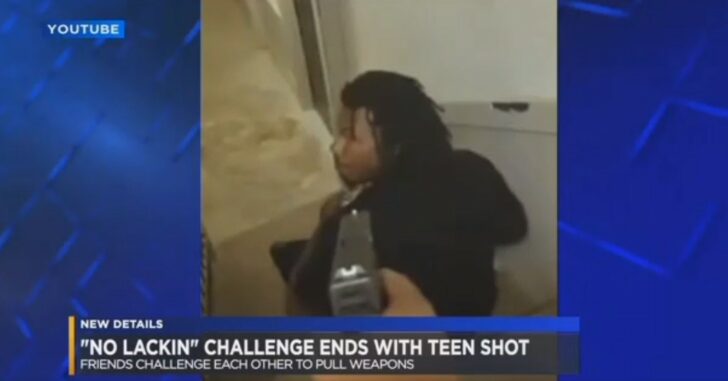 MEMPHIS, TN — Are you familiar with the “No Lackin” challenge?

Good. I wasn’t either until coming across this report. The “No Lackin” challenge is a celebration of stupidity on a level the likes of which I’ve never seen.

Watch the video below that shows some examples of this challenge. It looks more like a thug life challenge than anything.

I don’t have to tell you how this “challenge” went so wrong in late January.

Early Thursday morning, a 17-year-old was shot in the head at E’s cafe on Union Avenue. According to the affidavit, 21-year-old Sherman Lackland was sitting in a booth with two people he knew, playing the No Lackin Challenge when Lackland reportedly accidentally shot his friend.

“A real loud bang, then I see the guy across from him fall in the floor,” said Thomas Fitzpatrick, who was inside the restaurant when the shooting happened.

“He started grabbing him and telling him to get up and then he was kind of mad and was swinging stools and stuff,” Fitzpatrick said.

Lackland is now facing charges after playing a game some say should never be played again.

“That’s not what they’re made for, and they shouldn’t be having guns in the first place,” Rebecca Birch said.

“It’s something that you shouldn’t tamper with,” West Moore said. “It’s too many kids being killed as it is.”

At last check, the victim is in critical condition. Lackland is charged with aggravated assault, reckless endangerment, and unlawful possession of a weapon

The most recent update I could find for this case showed the gunshot victim in critical condition — however, that report was nearly a month old.

This transcends “There’s no need for this kind of dumb challenge.” This makes observers of the Tide Pod-challenge seem brilliant by comparison.

Folks, stay in school, and once you finish school keep your firearms out of reach of children.