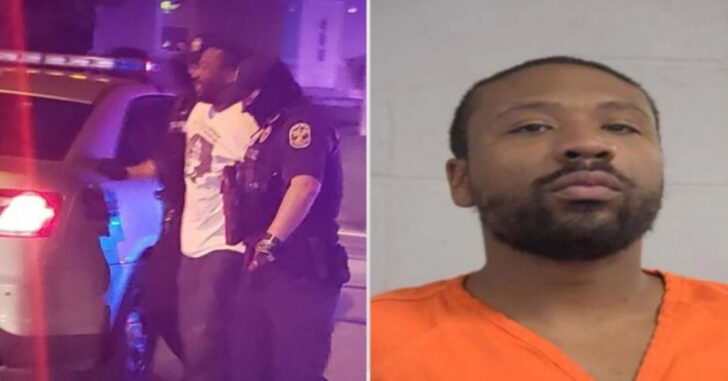 LOUISVILLE, KENTUCKY — A man walked up to multiple people on a patio outside of a bar & grill and opened fire without saying a word. According to police, the attack was random.

Louisville Metro Police officers responded to the bar, located on Beulah Church Road, around 11:30 p.m. Two of the men who were shot, Toreon Jermaine Hudson, 26, and William Scott Smallwood, 48, were pronounced dead at the scene, according to the Jefferson County Coroner’s Office. The other victim, Steven Matthew Head, 24, died from his injuries at University Hospital.

Michael E. Rhynes Jr., 33, was arrested just after midnight Saturday after police found him crawling in brush near the restaurant, according to Rhynes’ arrest report. Police said Rhynes’ clothing matched the clothing of the suspect caught on video and that he had a handgun loaded with several rounds that were manufactured by the same company that made the shell casings found at the scene.

Rhynes apparently didn’t know any of the people he shot, and no words were exchanged prior to the shootings.

A photo of Rhynes, being taken into custody by police, has been circulating and shows him smiling as he’s being taken away.

He was apparently armed with a handgun, which police found when he was captured.

This random attack, at a place where owner Joe Bishop says that he’s only had to call the police once, is the last place people would think that something like this would happen.

We know better, based on the years of coverage dealing with attacks of this nature, and that’s why we support the right to carry a firearm for citizens.

Rhynes is being charged with three counts of murder and his bond was set at $2 million.

Initial reports suggested that the suspect was wearing a “Justice for Breonna Taylor” shirt, but that turned out not to be the case.

We live in a new world, and a time where random attacks like this can and do happen, even in the least-likely of places. If you’re at a restaurant relaxing on the patio, or wherever, keep your eyes moving around and try to position yourself in a location that gives you a clear view of the area.

It’s unfortunate that we have to live like this, but don’t let fear dictate what you do. Instead, pay a little more attention to your surroundings and have a plan of what you’ll be doing if the poop hits the fan.