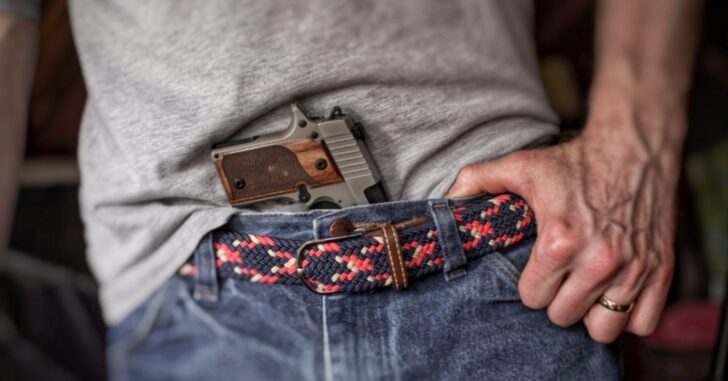 The vast majority of gun owners in this country are safe and law-abiding and there are solid statistics to back that up. In a nation with over 100 million gun owners and more than 400 million civilian-owned firearms, accidental gun deaths reached a new record low in the most recent reporting period. Americans obviously take the four rules seriously and that’s reflected in the numbers.

Still, in a population that large, there will inevitably be a few outliers who will give the rest of us a bad name. Take, for instance, Nicholas J. Ellingford. He was in a Lincoln City, Oregon grocery store Sunday when he had the uncontrollable urge to show his 9mm carry pistol to a friend.

In a grocery store.

Waiving a gun around in a store is bad enough, but the real problem came when he was finished peacocking and tried to put the gun away…which he apparently was carrying appendix-style.

Ellingford mistakenly pulled the trigger as he stuffed the piece back into his pants, police said. A bullet tore through the gunslinger’s groin and exited his thigh, just barely missing the man’s femoral artery.

Reports don’t indicate whether Ellingford was using a holster or not. Fortunately, no one else was hurt.

Almost worse, when police arrived and investigated, they discovered that Ellingford doesn’t have a concealed carry permit. So on top of dealing with his wounds and a likely reckless endangerment charge, he’s probably also looking at a charge of carrying a firearm illegally.

Ellingford could very well lose his gun rights altogether depending on the charges and how the prosecution shakes out. The rest of us will continue on in our usual safe responsible ways.

Previous article: [VIDEO] Rioters In Philadelphia Attack Vehicle With Dog Inside Next article: If You Follow These Steps, You'll Never Have A Negligent Discharge