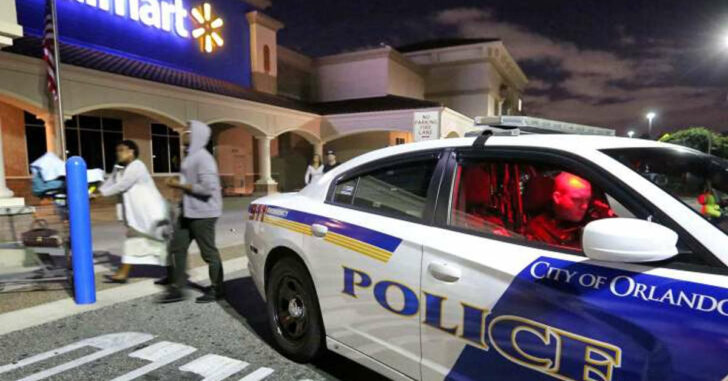 ORLANDO, FLORIDA — Two thieves walked out of a Walmart with stolen goods and were confronted in the parking lot by an employee. Thankfully, the employee had a worker and a customer at his back. One of the thieves thought it would be a great idea to pull his gun. That’s when the customer drew his own handgun to defend himself.

According to MSN, Orange County Sheriff’s Capt. A.L. Nieves confirmed that the thieves were loading the ill-gotten cargo into their trunk when they were confronted. When one of them drew his handgun, he was shot dead by a customer who drew his gun in response.

The investigation is still pending. In these sorts of cases, self defense has to be established and a number of other factors have to be ruled out. But, on the surface, it does appear that two guys stepped up to help a Walmart employee confront a pack of thieves in the parking lot. In the course of making sure that employee wasn’t hurt or killed, their own lives were jeopardized.

Thankfully, one of those men had a concealed handgun.

I’m absolutely certain that the customer who arrived at Walmart had every intention of picking up his items and going about his business. However, when you see someone getting paid minimum wage pursuing a pack of thieves, there’s something inside that says he shouldn’t have to go that road alone.

Let me be clear: I don’t recommend that course at all.

As a concealed carrier, my first and only priority is my own life. I don’t put myself into situations where I may need to use a gun to defend myself. When confronting a pack of thieves who are so stupid as to walk out the front door with their stolen goods, I would have already made the assumption that at least one of them is dumb enough to try to take a life for that merchandise.

That said, this man stepped up to the plate. And, in doing so, he did encounter what I think many of my reading audience would likely suspect: one of those thieves would be dumb enough to pull a gun.

In that case, now it’s a binary decision: shoot or be shot.

Thankfully, Florida has Stand Your Ground laws. That’s the system of laws that dictates that a man has no need to back down from a threat so long as he has every legal right to be on the ground he stands.

Poor planning for the thief. Good planning on behalf of that concealed carrier.

But it’s just as easy that situation could have turned way more tragic. Let’s not mince words: there’s no guarantees in a gun fight. This guy made it out without so much as a scratch. A couple milliseconds difference in the opposite direction and that could have been a completely different outcome.

Think clearly when you go into these sorts of situations. The last thing I would ever want to see is anyone hurt under any circumstances but we can’t control what evil shows up — we can just choose the method of how we engage it.