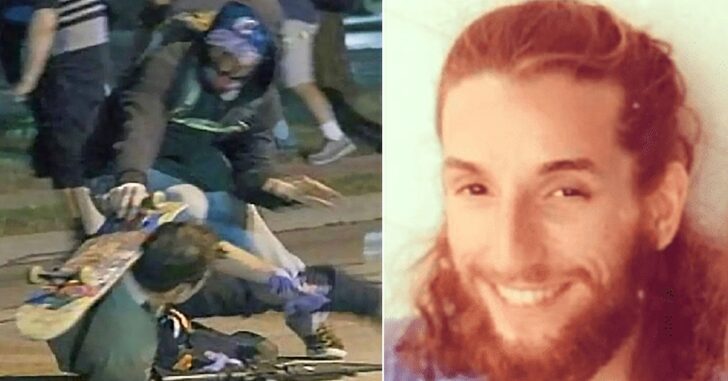 By Kat Ainsworth via TTAG

The latest installment of “what did I just read” comes to us courtesy of CNN. CNN has delivered quite the onslaught of content on what all has gone on in Kenosha, Wisconsin. Now they’ve continued the journalistic excellence with a piece on Anthony Huber, the now-deceased 26-year-old man with a long rap sheet of domestic violence.

CNN reported on Huber’s involvement in the Kenosha violence:

Anthony Huber was armed with nothing but his skateboard when he spotted an armed person among a crowded street in Kenosha, Wisconsin, but he still ran toward the danger, his girlfriend says.

“He pushed me out of the way, like he was telling me to run off, and I tried to grab him,” Hannah Gittings told CNN. “I should have been there, but there was going to be no changing his mind.”

So Gittings was selfless. Wait…it gets better:

Gittings says Huber launched at the armed individual to protect her and the people nearby.“He did a…heroic thing.”

Heroic? I don’t think that word means what CNN thinks it means.
Interestingly, CNN detailed part of the criminal complaint against Kyle Rittenhouse as well:

According to a criminal complaint, Huber reached for the suspect’s gun with his hand while holding the skateboard in the other. As Huber tried to grab the gun, the suspect pointed it at his body and fired one round, the complaint says. Huber was seen staggering away and then fell to the ground. He died from his gunshot wound, according to the complaint.

Armed with “nothing but his skateboard.” Described as “sweet and loving” despite years of domestic violence, false imprisonment, and use of a deadly weapon charges.

Huber was a felon and couldn’t have legally carried a gun. But he had his skateboard and he used it to crack Rittenhouse on the head and shoulder.

Fellow rioter and assailant Gaige Grosskreutz was also a felon, but he was carrying a handgun. If you haven’t seen the series of images where Grosskreutz first approached Rittenhouse, who is down, with his hands raised before suddenly drawing his illegally-carried handgun on him. Look closely and consider these tactics that are being used by rioters.

Anything is a weapon when wielded properly. A skateboard is absolutely a weapon. There are currently three skateboards sitting in the corner here as I write this — a longboard and a couple of shortboards like Huber had. I guarantee that I could go in the backyard and use one of those to crush a watermelon or pumpkin with it in record time.

One rioter threw a brick wrapped in plastic at Rittenhouse. Huber beat him with his skateboard. Rittenhouse was on the ground being kicked and battered. His life was clearly in danger.

CNN claiming that a skateboard is “nothing” and Huber’s girlfriend calling him “heroic” are mind-boggling. This is the same mindset that believes a suspect with a knife poses no real threat. This is the attitude that complains when law enforcement officers don’t shoot to wound instead of shooting to stop a threat.

Now there’s some guy selling decks to promote #skateforhuber as though Anthony Huber is some sort of folk hero for the skater community.

Again: anything and everything can be a deadly weapon. I can’t wait to see what CNN comes up with next.