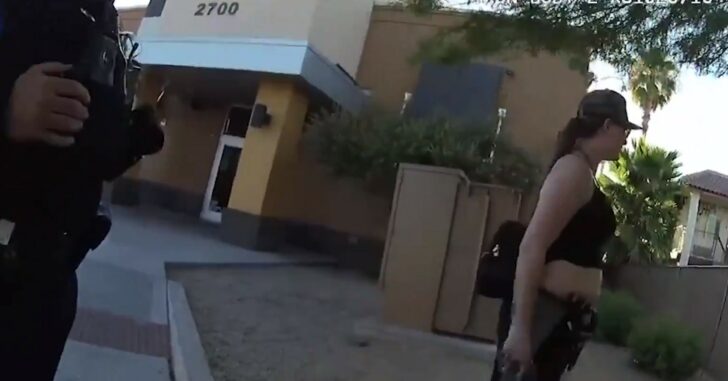 Police officers have tough jobs, and are faced with insane situations on a daily basis. The incident we’re looking at here looks innocent when you start to watch the video, but desperation sets in for this young woman and the scene turns dark in a hurry.

An investigation is being conducted after officers from the Phoenix Police Department gunned down a suspect they claim fired shots at them first. The intense bodycam footage shows the suspect, 24-year-old Jovana Kelsey McCreary, resisting arrest after officers found both ammunition and illegal drugs in her possession. Watch as the chaotic scene unfolds, including when she appears to pull out a concealed handgun and fire it off, as well as the moment police return fire with shots of their own. McCreary, who was taken to the hospital after the incident, was later charged with aggravated assault on a police officer, resisting arrest, possession of narcotic drugs and an outstanding misdemeanor warrant.

In the video below, I’ll point out a few things that I noticed, keeping in mind that I’m no expert.

Frist, the officers didn’t pat down the woman, and this could be because they didn’t see an immediate need to do so, or they were waiting for a female officer to do this. I could be wrong on both accounts, but a pat down would have likely led them to the firearm.

Second, when things go off, there is a person in the background running in the opposite direction, who is in the direct line of fire of at least one officer. This is a big no-no for anyone, and luckily that person wasn’t shot.

As for shooting the woman as she ran, with her back towards the officers; That seems to be a fair shoot. She could have easily turned around, and quickly, to fire at the officers.

Take a look at the video and share your thoughts. How do you think the situation was handled?

Previous article: 110 Of The Best Selling Guns During The Pandemic And Riot Times Of This Country Next article: The TMC from Rock Island Armory is Two Awesome Guns in One