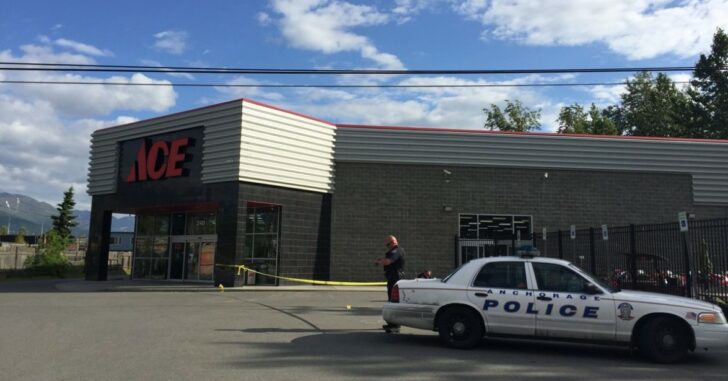 ANCHORAGE, AK — In one of the more bizarre cases of a robbery gone wrong, a man received multiple gunshot wounds while trying to flee a hardware store by security guards after having fired several rounds into the store’s cash register.

The security guards shot the fleeing man, who has not been officially identified, in the abdomen and the shoulder, said Sgt. Jeremy Conkling of the Anchorage Police Department. The man was taken to the hospital with injuries that are not believed to be life-threatening, Conkling said. He said police detectives were investigating the incident. ‘The man did have a gun, he did fire shots in the store and he was shot by security,’ Conkling said.

No one else was injured in the incident.”

The store’s owner, Stephanie Van Ness, said that this was the first time that someone has attempted an armed robbery in her store, which has been in business for 50 years.

Now, this is interesting for a couple of reasons, but let’s look at the most prominent one — security shot the man on the way out.

If this was a concealed carrier, I would be warning that this is very unsafe territory, legally speaking. If the man is armed and has fired that gun, obviously he is a deadly threat. However, there is no telling what may happen in a court of law to the citizen who shoots a fleeing man.

Now, there do not seem to be any legal ramifications here, and we’re glad for that — but it might not always work out as well for the armed citizen. Stay safe out there.

Previous article: Has Your Barber Ever Tried To Rob You At Gunpoint? This One Did... Next article: Why Some Off-Duty Police Go For Ankle-Holster Forty-Fives