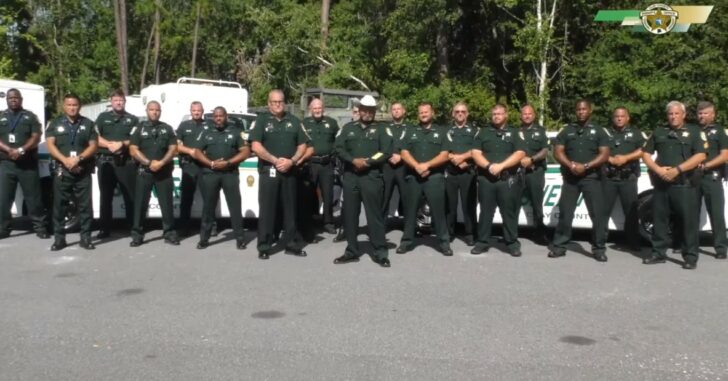 CLAY COUNTY, FLORIDA — Clay County Sheriff Darryl Daniels spoke in front of the camera in a Facebook video, along with numerous deputies by his side, on the topic of violence coming to their County and how they would respond.

While making a point that he stands behind peaceful protests, he won’t sit idly by if things turn violent.

“If we can’t handle you, you know what I’ll do? I’ll exercise the power and authority as the sheriff, and I’ll make special deputies of every lawful gun owner in this county and I’ll deputize them for this one purpose to stand in the gap between lawlessness and civility.”

People running against him in the upcoming elections had critical words for the Sheriff’s video.

Harold Rutledge, one of those running against the Sheriff, responded to an inquiry by News4Jax: “I am appalled at Sheriff Daniels’ Facebook video. He has challenged rioters and looters to come to Clay County and cause mayhem. Clay County was not one anyone’s map to create turmoil until Sheriff Daniels put out his threat.”

I don’t know about you, but when I see a statement such as the one that Sheriff Daniels released, I immediately believe that the county won’t be having any real problems. They’ve defined themselves as a location that sets boundaries, and won’t be intimidated or back down should things turn violent.

Previous article: 9 Months With The Hellcat, And The Verdict Is In On This Baby Next article: One Of The Worst 'DGU' Videos You'll See: "I’m a Democrat. I can shoot you because Democrats get away with everything."