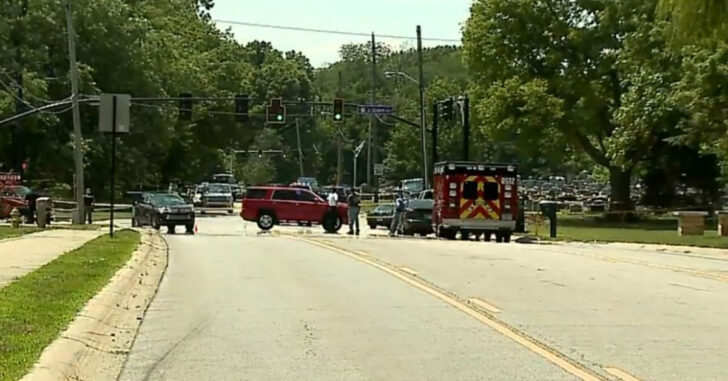 BROWNSBURG, INDIANA — A wild scene unfolded in an unprovoked attack on two people working at a cemetary, and ended with two dead and multiple injured.

This is a wild ride, so sit tight.

A gunman opened fire on two men working at a cemetary in what police say was an unprovoked attack. During this, another man who was passing in a vehicle, noticed what was happening and wound up shooting and killing the suspect.

That suspect, 22-year-old Joshua Hayes, was pronounced dead at the scene.

The other man who died, one of the two working in the cemetery, was identified as Seth Robertson, 36, of Indianapolis.

Officers with the Brownsburg police were called around 1:15 p.m. Tuesday to the area of 56th and North Grant streets after receiving a phone call of multiple shots fired and a man down in the middle of the road, Cpl. Chris Nelson with Brownsburg police said at the scene.

Police arrived to find Hayes and Robertson in the street, one man south of the intersection and the other man west of it. Both were pronounced dead at the scene of apparent gunshot wounds, Nelson said at the scene.

Pyatt-Barrett said in the news release that Hayes drove to the cemetery, approached Robertson and another man who police referred to a “Victim 2.” Hayes then opened fire.

“This led to a foot chase where Robertson and Victim 2 separated to seek safety and cover from Hayes’ gun fire (sic),” the news release said. “Hayes continued his pursuit of Robertson, while firing upon him, until he caught up with him in the intersection of 56th St. and N. Grant St, where he ultimately shot and killed Robertson.”

Hayes then began to chase Victim 2 through a neighborhood, and ultimately ending up back to the main street. A physical altercation broke out between the two and additional shots were fired.

This is when the motorist, identified in the release as Victim 3, comes into the picture. This man was stopped at a traffic light and was struck by a bullet from Hayes as he was attempting to shoot Victim 2.

“Victim 3 was armed with a firearm that they are legally licensed to carry and intervened on the behalf of Victim 2 and numerous other civilians in the immediate area that were rendering aid to Victim 1 and/or stopped in traffic,” the news release said. “Victim 3 fired his firearm at Hayes as Hayes was pointing his firearm at Victim 2’s head. Hayes died on the scene.”

Victims 2 and 3 were treated for injuries at the scene and were cooperating with police.

Talk about a crazy scene, and while Hayes was unfortunately successful in killing one person, the armed citizen saved the other man’s life. Possibly other lives as well, but we can’t say for sure because the extent of Hayes’ rampage plans are unknown.

Driving down the highway of a quiet town is usually the last place you’d expect to need your firearm, but bad things happen in every corner of the world. That’s why we promote responsible concealed carry, training, and carrying your firearm with you as much as possible.

The concealed carrier in this story was able to shoot Hayes and stop him, all while Hayes had his gun pointed to Victim 2’s head. That’s an insane picture to paint in your mind, but that’s exactly what happened. Think about that for a moment the next time you train, and you’ll quickly realize that this concealed carrier pulled off quite the feat.

Previous article: [REVIEW] Essential Holsters Naked Holster: A Total Shock And Not At All What I Was Expecting Next article: [VIDEO] Unmasked Man Flips Bird And Pulls Gun On Masked Man After Walmart Confrontation About... Masks