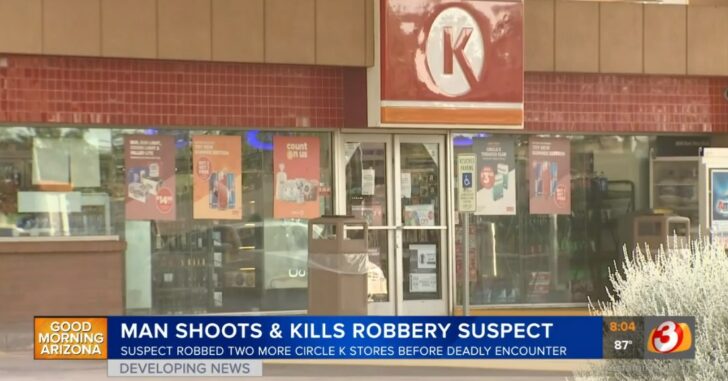 SCOTTSDALE, ARIZONA — An armed bystander took matters into his own hands after a suspect came into a gas station just after 2 a.m. local time and announced a robbery. That suspect wasn’t messing around, and didn’t have any problem taking lives in order to execute his goal; stealing money.

According Sgt. Ben Hoster of the Scottsdale Police Department, an armed man walked into the Circle K intent on robbing the place.

“He fired several rounds at the clerk during the robbery when he was obtaining money,” Hoster explained. While that was happening, another man — “an innocent bystander” —  walked into the store, Hoster said. The suspect shot and killed him.

The clerk was able to escape out the back door and was not injured.

At the same time, someone else was inside the store. And he was an armed good guy.

Another bystander “engaged the suspect in gunfire” as he left the store. “A gunfight ensued. The suspect was killed at the scene.”

The second bystander was wounded, but stayed at the scene and was later taken to the hospital.

The suspect shot up two other gas stations prior to talking into the last place he’d ever be. In those cases, no one was injured.

His time on earth was ticking that night, especially in a state like Arizona, as we was going to encounter an armed citizen at some point. The third time was a charm for the community, not the suspect.

We are investigating a shooting at 8140 E Indian School. 2 subjects are deceased. The suspect was killed along with another individual. PIO headed to the scene. Media staging at 81st St & Indian School.

The second bystander who shot the suspect was injured, but remained at the scene to talk with police. He was later taken to the hospital for treatment of his injuries.

Millions of new gun owners have come into the mix in just the past few months, and many of them are carrying now or plan to carry in the future. Who knows how many new concealed carriers there are, but one thing is for sure; More than ever, citizens are taking their safety into their own hands. They’re buying guns, they’re training, and they’re carrying.

Previous article: Clerk Literally Dodges Bullet, Returns Fire On Man Who Tried Passing Counterfeit Bill Next article: Armed Couple Who Confronted Protesters Now Have Armed Guards, And They'd Like You To Help Pay For Them