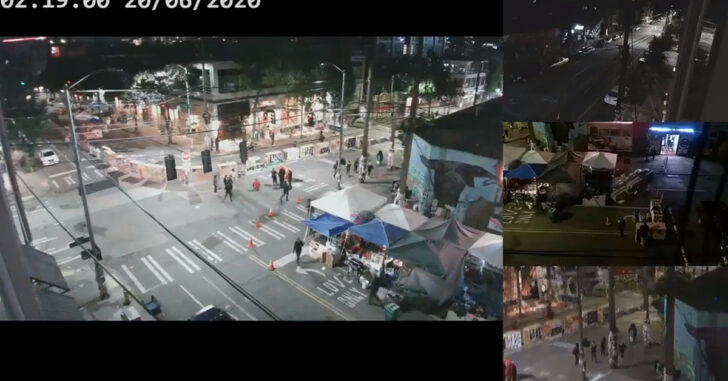 SEATTLE, WASHINGTON — Violence broke out in the autonomous zone inside Seattle, called ‘CHOP’, which was established a few weeks ago as part of ongoing protests after the murder of George Floyd in Minneapolis.

A shooting occurred this morning inside the occupied land, and one person was killed while another was injured. There are mixed reports on the people shot, with some saying it was one shooting while others are reporting multiple shooting locations at the same time.

Police responding to the incident were met by a violent crowd that would not let them enter.

Police investigating shooting at 10th Avenue and East Pine. Will update with additional information when available.

Cameras inside ‘CHOP’ were able to record the gunshots, with people yelling and running to find out what had happened.

A person live-streaming on Facebook was close to the shooting, capturing the chaos around the 29:00 mark in the video below. Be warned that the video has strong language:

Seattle Police released the following information about the incident:

On June 20th, at approximately 2:30 AM, East Precinct officers responded to a report of shots fired in Cal Anderson Park. This is inside the area referred to as the Capitol Hill Organized Protest (CHOP). Officers attempted to locate a shooting victim but were met by a violent crowd that prevented officers safe access to the victims. Officers were later informed that the victims, both males, had been transported to Harborview Medical Center by CHOP medics. Officers responded to Harborview and were informed that one of the victims, a 19-year-old male, had died from injuries. The other victim, also a male, unknown age, remains in the hospital with life-threatening injuries. The suspect or suspect(s) fled and are still at large. There is no description at this time. Homicide detectives responded and are conducting a thorough investigation, despite the challenges presented by the circumstances.

Both victims were driven to the hospital by people from inside the zone, and police were eventually allowed in to perform an investigation.

Local media reports that an SUV arrived in the area and that a person got out with a rifle and started shooting. It’s not clear whether the SUV was already inside the zone or had made entry right before the shooting.

A security employee working in the area reported the shooter had been in a black SUV that arrived in the area on E Pine. A 911 caller told police a man carried a rifle out of the SUV before gunfire erupted, according to East Precinct radio updates. The man who was killed was hit by multiple shots on the southwest corner of E Pine in front of the Odd Fellows building. Camp security was reported following the suspect after the shooting. There have been no reported arrests by police.

Apparently on another night in ‘CHOP’, a woman was shot in the hand while live-streaming. That video is below, and contains graphic content.

It would seem that the zone isn’t as safe as it’s being touted, but to be fair, we don’t know who the suspect is that opened fire. Regardless, first responders were hindered from rendering aid to the victims, and that’s a dangerous recipe.

Previous article: Gun Stocks On The Rise Thanks To Huge Increase In Industry Sales. Here Are Some To Watch. Next article: Bad DGU: Man Aggressively Approaches Armed Citizen With Garbage Can