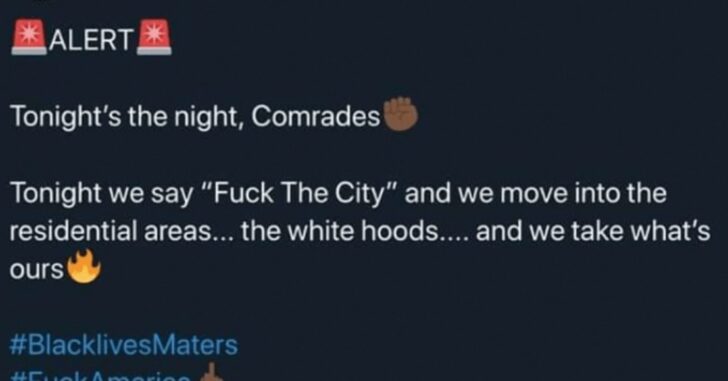 UPDATE: Since this story was published, new reports state that the Twitter account set up under the handle Antifa_US was fake, and the tweet was a hoax.

The FBI has issued a warning to the Minnesota National Guard, and maybe others, about a “credible, lethal threat” against them.

According to Law Enforcement Today, the warning comes after investigations into whether extremist groups had been inciting and creating violence during the protests across the Country.

Just in: Adjutant General of the Minnesota National Guard Maj. Gen. Jon Jensen says his soldiers are armed & “carrying ammunition” in their magazine pouches based on “a credible lethal threat” to Minn NG conveyed by the FBI on Thursday. Can be upgraded based on local conditions.

Earlier today, President Trump broke the news that the group that goes by the name Antifa would be characterized as a terrorist organization.

Antifa activists have reportedly been posting online via multiple platforms in an effort to coordinate protests, riots, and violence.

Then, shortly after Trump’s announcement of the group’s new classification as terrorists, a screenshot began circulating social media at a rapid pace, reportedly from an Antifa Twitter account that has since been suspended.

The post describes their plan to move from the city and into residential areas to “take what’s ours.”

The internet went ablaze with this tweet, and seems to have some legitimacy, as people start reporting that members of the group are on the move.

BREAKING: DC Antifa heading to White House within the hour

With a threat to residential areas, it’s important to mention (again and again) that everyone should have a plan of self-defense of themselves, family and home. While the chances are low of violence related to the riots reaching your specific neighborhood, one can’t be too careful. We practice, prepare and train for self-defensive situations, and it’s good to be on alert as much as possible.

For the foreseeable future, heightening that alert isn’t such a bad idea.

It’s going to be a long and painful night for our Country.