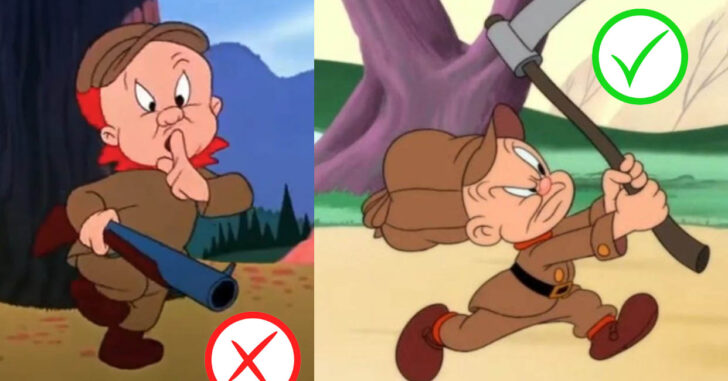 To cater to what Warner Bros. calls a ‘modern audience’, they’ve decided to confiscate the firearms of Elmer Fudd and Yosemite Sam. They’ll be keeping all the other stuff, though. Blowing each other up with dynamite is still politically correct.

Looney Tunes Cartoons, the new series of animated shorts released exclusively on the HBO Max streaming service, will not be “doing guns,” says series executive producer and showrunner Peter Browngardt. A throwback to the Looney Tunes cartoons of the 1930s and 1940s — bringing back classic pairings like Bugs Bunny and Elmer Fudd, Tweety and Sylvester, and Daffy Duck and Porky Pig — the zany cartoon violence depicted in Looney Tunes Cartoons will continue with anvils, dynamite, and other weapons as part of the 1,000-plus minutes of all-new animation taking a cartoonist-driven approach to its simple, gag-driven storytelling.

What is classic Elmer Fudd going to use then, while he’s hunting wabbits?

In response to US gun violence, the showrunners will not include firearms in Fudd’s arsenal. That is not to say that he has given up hunting Bugs Bunny, though – he just uses a scythe instead.

How soft is the country going to get? Is a high schooler, bent on exacting revenge on classmates who pick on him, going to change is mind because a cartoon character no longer carries a gun? Is there truly a thought that this move will help curb firearms being used unlawfully?

Are the Chicago gang members going to drop their guns because their childhood cartoon characters have done so? Because let’s be real, what goes on in Chicago is the actual gun violence, but the media doesn’t may it much attention.

American history is being re-written.