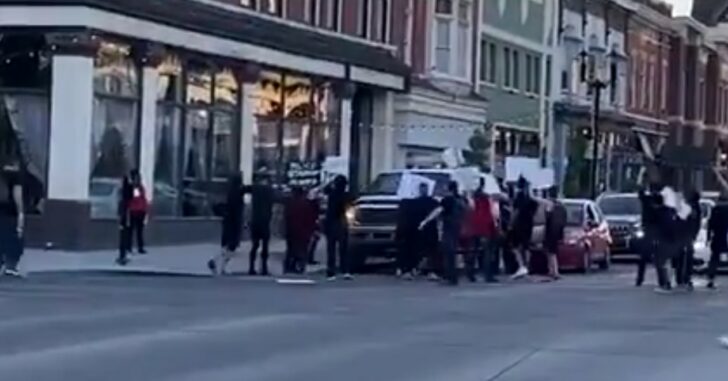 PROVO, UTAH — A driver of an SUV is in the hospital after police say he was shot by someone in a group of protesters after he tried driving through the crowd. Video of the incident was captured and can be seen below.

A group protesting police brutality had gathered at the intersection of University Avenue and Center Street on Monday evening, according to Lt. Brian Taylor of the Provo Police Department, and a second group arrived to express their support for police. Shortly after 8:30 p.m., protesters were in the street, blocking cars, when a large, white SUV heading south on University Avenue pushed its way through a crowd of protesters, knocking several of them aside.

Filmed this while covering protests in Provo a few hours ago. Full story in the morning on @UniverseBYU pic.twitter.com/nUB6F3faTR

Police said in a statement that the driver pulled into the right turn lane, and at that time several protesters crowded around the vehicle. The driver then “hit the gas trying to leave the situation.”

As for the person who fired the shot, he wasn’t done just yet.

“The same protester ran after the vehicle and shot a second round that went through the rear passenger window” and then concealed his firearm. He “later approached another vehicle at 500 North and University Avenue, striking and breaking the window with the handgun.”

A clearer video of the incident can be seen below.

Marxists goon fired a handgun into car trying to escape the mob!

WHY is media SILENT???
WHERE IS @ProvoPolice???

If you watch the beginning of the video closely, you’ll see a man rolling on the ground, but is quite a distance from the SUV. If you follow that man, seen in the screenshot below, it looks like he might be the one who pulled the gun and fired.

We zoomed in on the video (below), which doesn’t help the resolution, but maybe will shed light on who the shooter was. Can you keep track of the chaos? Keep your eye on the guy rolling on the ground. Is he who police are searching for?

Previous article: WATCH Full Interview With Man Who Used Rifle To Defend Family With Wife By His Side Next article: 9 Months With The Hellcat, And The Verdict Is In On This Baby