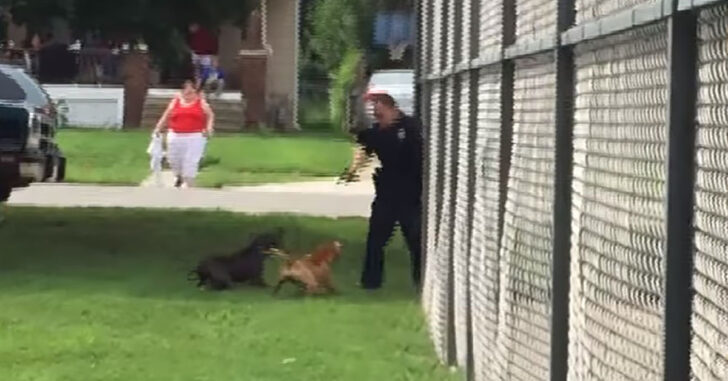 With over 7.8 Million views as of this writing, a video is going viral that shows two dogs aggressively going after people in a park, with at least one person showing the cameras the damage the dogs have done to his body.

Firefighters arrive with a hose in an attempt to get the dogs away from people, animal control tried catching them with little success, and a police officer tried using a baton.

When the baton didn’t work and the dogs continued towards the officer, he drew his firearm and at first hesitated, moving between targets. He then fires a shot at the brown dog, seemingly striking it in the leg and rendering that dog incapacitated. The black dog, unsure of what just happened, goes to the brown dog in a state of confusion and unsure of what to do.

The video ends with the two dogs being led into the back of an animal control vehicle, and were both likely put down due to the incident.

The video below shows the ordeal and how everything went down, including the multiple people at the park trying to get to high ground in an effort to avoid attack.

Some debate happens anytime we see a video of this nature; Was this a justified use of a firearm?

Absolutely. The dogs were both acting in an aggressive manner, had attacked at least one person that we know of after watching the video, and continued to pose a threat to everyone in the area.

The fault here doesn’t lie on the dogs, but on the owner of the dogs. Their aggressive behavior, coupled with their ability to roam around free (whether escaping or otherwise) is what contributed to this incident. And those are both a result of failed ownership.

What are your thoughts? Chime in below with your comments.

Previous article: [VIDEO] Hear Jim's Story, A Disabled Veteran Who Served In the US Army In Vietnam Next article: When You Think You've Seen It All: Teen Tries Robbing Store With His Feet