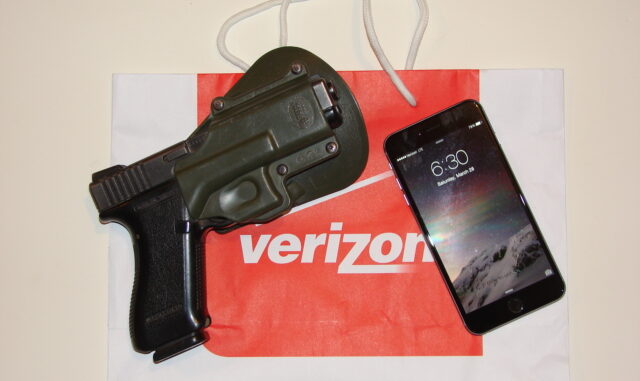 I had been meaning to update my phone for a long time.  I probably should have done it four years ago.  Finally, circumstances pushed me to do this necessary task.   Due, in part, to the insane federal restrictions on gun mufflers, I have suffered significant hearing loss.   I wanted certain technological inclusions with any hearing aids that I would use, and technology has caught up to my desires.  My audiologist and I came up with a solution that met my requirements, but the phone that matched up best was Apple’s iPhone.  So I went from a five year old flip phone to the iPhone 6 plus.

My audiologist wanted to help me with the software end of the iPhone connection.   My audiologist is a former concealed carry student, so we had already developed a high level of trust.   I ended up at the Verizon store with an hour to get the phone, the upgraded plan, change over my contact list, and get to the audiologist appointment.    As usual, I was open carrying my Glock 17.

The people at the store were great.  No one blinked at my holstered pistol, and the representative assigned to me was named Kace.   Kace had served in Yuma as a Marine.  Kace was enthusiastic about phones and guns.  He was teaching his wife to shoot pistols.  The representative on the other side of the counter next to us noticed my holstered pistol.  She decided to make a comment.

She said: “I love your pistol! I have a Glock 23, and I really like it a lot.”  She thought it was very cool that I was open carrying.

The service was good, I accomplished what I needed to do, and left the store.  I decided that an article about the interaction was worthwhile, so I grabbed my camera from the truck and headed back to the store. Just inside the door, I found the store manager.  I let him know what I wanted to do, and agreed not to take pictures of store employees.  He said that he had just purchased a Hi-Point carbine in .40 cal, and owned a Glock.  We both agreed that the Hi-Point carbine was a good value for the money.  I mentioned that I had one in 9mm.  He said that he was saving up for an AR-15 clone.  I took some pictures of the iPad that I ended up getting a deal on… I cannot say that I am a happy with all of Verizon’s market decisions, but I have to give them credit.  Sometimes being big just works.  They have treated me well; the service was great in a busy store; and I could not ask for a more second amendment friendly environment.

Kace did well by me, and deserves credit for doing a good job.  Heck, as a retired DOD guy, Verizon even gives a 15% discount.

I have to admit: I am being sucked into the Apple ecosystem.  I love my iPhone, even though the learning curve is steep.

The military trilogy of necessities holds: you have to be able to move, shoot, and communicate.  With smart phones and the Internet, we have communications like never before.