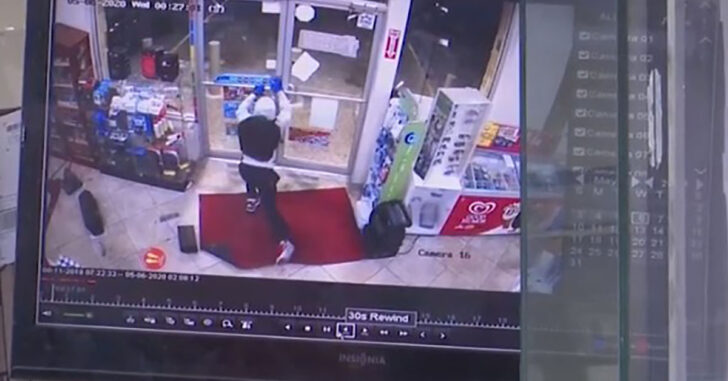 HOUSTON, TEXAS — A gas station clerk fought for his life when 4 armed men broke into the business while he was working. It happened around 1:30am on Wednesday, and proves that the clerk was prepared for such an attack.

Houston police are reviewing the incident caught on surveillance video. Investigators said four suspects tried to force their way into the store which was locked.

The clerk was in a plexiglass pod when he was approached by the robbers, police said.

The clerk, fearing for his life, opened fire on the suspects, wounding and killing one of the men, police said. A second suspect ran from the scene while two others drove away in a dark-colored BMW.

The clerk was not injured during the incident.

While certain jobs hold a higher statistical risk of armed robberies, it shouldn’t deter any law-abiding citizen from carrying at work. If you don’t think it’ll happen to you, you’re wrong. The “I live in a nice part of town” argument holds no weight, as crime came visit anyone, regardless of where they’re situated.

Luckily for this clerk, he was able to successfully stop this armed robbery attempt, and he walked away without a scratch. That’s a successful self-defense.

Video from the incident can be seen in part below:

Previous article: Arrests Made In Shooting Death Of 25-Year-Old Man As He Was Out For A Run Next article: Ex Tries Forcing Way Into Woman's Home, She Uses Shotgun To Stop The Threat