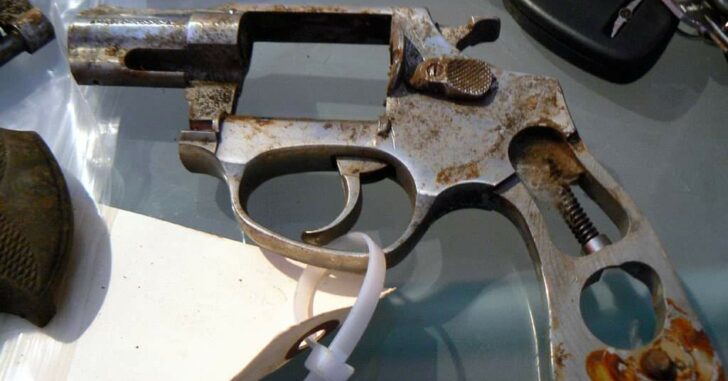 This is a real-life story from Aristotle Bartolome, Director of Sales and Marketing at Rainier Arms. Aristotle gives details surrounding the journey of a revolver that his father had given to him when he was in his teens. Through the years, many things transpired, and the outcome to this story is nothing short of amazing. I’ll let it speak for itself:

1996 was a big year for me, I was moving out on my own at 19yo. A week after I had moved into my apartment, my dad drops by to check out the new digs. My dad walks in, with a brown paper bag in hand. He started telling me how proud he was of me. He then started talking to me about the essentials of self-preservation and learning to defend myself and “being the MAN of the house.” To this day, it’s one of the words I recall vividly from my father’s lifetime of advice. “No one out here cares more about you than YOU, Son. Your life is in your hands.” He pulls out a revolver from the brown paper bag, and it was a Rossi 88 snub nose .38 and a box of ammo. I began going to the gun range on my own at this point whenever I could. I was so proud of this $180 gun, as it was the first handgun I ever owned.

A few weeks later, I’m at a get-together with friends and catch up with an old high school friend I haven’t seen in a while. We get to talking, and I find out he wasn’t doing so well and was actually homeless. I invite him to stay with me until he can get back on his feet. A week later, I come home to an empty house, empty of my .38, and some clothes and food. My then good friend had disappeared, along with my stuff.

Now flash forward to 2007. I am married, with my own home and first child just around the corner. My father had passed away on February 6, 2005, from complications from a triple by-pass surgery at Swedish Hospital.

I go to the mailbox to find a letter from the Seattle Police department. I rush back to my house and open the message. Apparently, they recovered my pistol and was asking me if I still wanted it.

I call the detective about my firearm. He explains it is “beyond hope of repair” and was telling me I was better off allowing them to destroy the gun. I decline and explain that it had sentimental value and that regardless of condition, I would like to retain the firearm. He agrees and gives me instructions on getting my pistol back. I drive to the evidence unit in Seattle. And as I am signing paperwork, I read the details of the recovery and got goosebumps. It was recovered 2 years on the anniversary of my father’s death, February 6, 2007. The location of where it was located was an address directly across the street from the room of the hospital where my father passed away. Some maintenance workers had found it in a flower bed.

I bring the gun home and start to polishing on it. I was surprised at how well it had held up, and I’m going to assume it may have been buried in that ground for possibly 10 years. I found that whoever ended up with it, used the WRONG ammo in the gun. With the cylinder pitted, it was trash and would no longer cycle properly.

I first posted this story on Glocktalk and THR almost 13 years ago. A few days after I posted this story, I got a random message from Mike Carmoney. He said he was so moved by the story that he wanted to help me as he was a gunsmith that was well known for his work on revolvers specifically. He offered to fix the gun and emailed me a shipping label and refused any form of payment. I got the gun back a week later, and to this very day, it is still loaded up in my home, standing sentry to protect our family.

It is my most prized possession, and one day will go to my son.