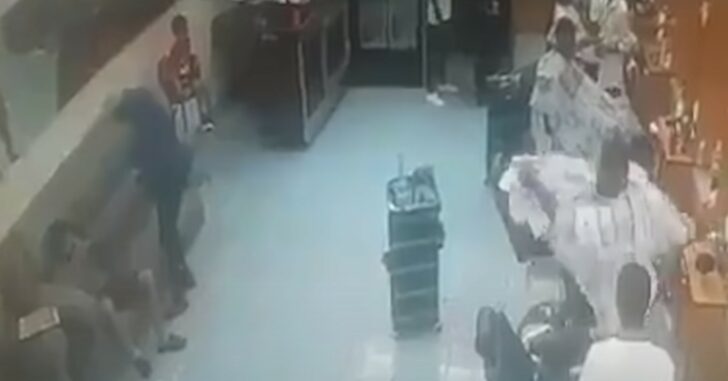 Multiple robbers come into the shop and announce a robbery, but what they don’t know is that one client, sitting down for a haircut, has a handgun and excellent marksmanship.

The robber in the black hoodie starts to shake down a child that’s sitting on the couch. That’s his first target, and little does he know at the time that it’ll also be his last.

The armed patron sees what is happening and jumps up from his chair. He draws, and with his firearm still underneath the barber gown, gets on target and fires a shot.

Robbery went wrong at a hair salon in Laudium Pretoria. One suspect by shot dead by a client. #shocking pic.twitter.com/BOXCoXhyB5

The bad guy is shot square in the back, effectively paralyzing him. The video goes on to show the robber trying to crawl away, but he is unsuccessful and does not survive the encounter with the armed citizen.

John over at Active Self Protection has a breakdown video of this incident, and you should give that a watch below to learn even more.