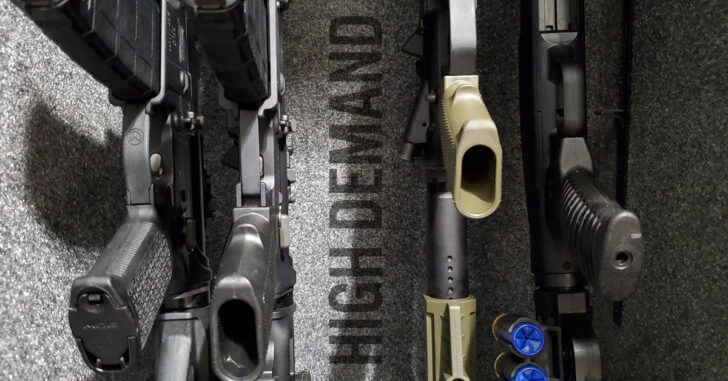 It’s a wild ride so far and when people are uncertain about the future, there tends to be a run on certain items. In that bunch are the categories of guns, ammo and related accessories.

I’ve been watching reports closely to see how everything has been panning out, and the last few days have proven to be extremely heavy in terms of purchases by consumers in the gun space.

Gun owners for years or those brand new, it seems that everyone is looking to arm themselves in an effort to be better prepared.

I spoke with Marc Rosenthal, the owner of multiple gun shops and ranges called High Noon Guns situated south of Tampa, FL, and asked him how things have changed in the last 48 hours.

“We’ve had a few new gun owners come in that said they feel they’d be more comfortable having something at home, given everything going on in the world. Many others just want to make sure they’ve got ammunition for guns they already have,” Marc explained.

He then talked about different mindsets that happen when situations pop up that cause mass concern.

“When people are being told what to do, where to go, when to go, and closing businesses and everything else, I think that people just get concerned. Any time there is a negative event, whether it’s a hurricane or mass shooting or coronavirus, it makes people rethink their ability to protect themselves, their businesses.”

While Marc says that business has increased because of the current climate, they still take care to make sure that people aren’t getting in over their heads with their purchases. “We’re not going to sell inappropriate guns to people who can’t handle those guns. We try and guide them correctly. If we don’t have what they’re looking for, we’ll do what we can to find it,” he explained.

With guns comes ammo, and a decrease in supply can already be seen. I spoke with Kevin Underwood, owner of Underwood Ammo, to see how his business is handling the increase in orders.

At first, I didn’t think I’d be able to talk to him based on his reply;

He went on to say that, at the rate the orders are coming in, they will sell a year’s worth of ammo in just 60 days. His time was limited to talk, which is all the information I need to know that they’re up to their necks in orders.

Moving on, I wanted to get a feel for how the holster world was doing, so I reached out to some friends and found the following:

I got on the phone with Mike Vedder of Vedder Holsters, asking him how things have been going on their end. His response, like the others, wasn’t surprising.

“We’ve seen a pretty high uptick in sales over the last week. We’ve had some of our highest non-sale days over the last few days.” I asked him if any customers were saying why they were purchasing, and I got the answer I thought I would. Mike explained, “Customers have been commenting on some purchases, for sure. One customer explained that he’s owned guns all his life but never carried one. He has his permit, but hasn’t considered carrying until now. He’s now one of the newest owners of a Vedder holster.”

Mike, like the others, is in the same boat.

I then spoke with Nathan Engelking, the marketing director of CrossBreed Holsters, who gave me some startling (not) news.

“CrossBreed has had a very busy year since November of 2019 with an incredible increase over the last three weeks. The numbers we are seeing now are in pace or above what we experienced in 2016.”

I think it’s safe to say that the beginning of a very buy season for gun-related businesses… has begun. As the weeks go by, we’ll see more and more wait times for orders, as well as more and more people looking to stock up on items across the board.

As you’re likely a gun owner, since you’re reading this article, have you been making purchases with the crowd? Let us know in the comments below.