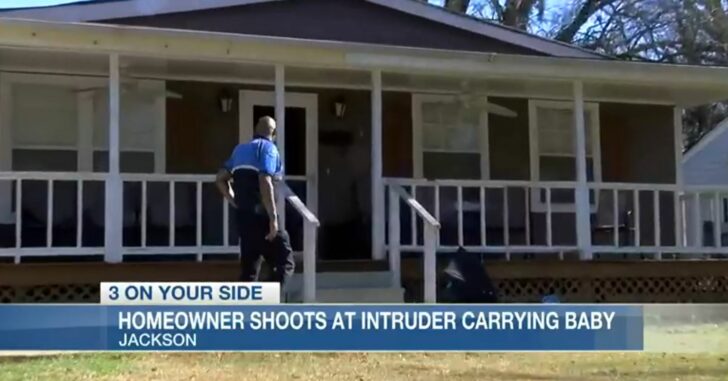 JACKSON, MISSISSIPPI – By all accounts this really should be a Florida Man story. However, our strange story takes place in Mississippi. It’s not everyday a man smashes into another persons house while holding a baby.

“We heard a loud banging at our door,” Harlen Cavett said. “By the time I came out of the bedroom, I see the person in the glass.”

Cavett says suddenly the man burst through the door. He raised his gun and fired, and then stopped stunned to see what was in his arms.

Harlen says the man started mumbling strange things. He called police who arrived and removed the man and baby.

Cavett was in bed sleeping with his wife when they heard a loud banging at the door. Cavett and his wife went to inspect what the banging was all about. Before they could reach the door, however, a man comes crashing through into their home.

Without stopping, the man begins running in the couples direction. Cavett, who brought his firearm with him to investigate, immediately drew his weapon and fired. However, Cavett stopped firing when he realized the man who just crashed through the glass on his door was holding a child, and lifting the child in a way that seemed like a human shield.

Cavett watched the man run past him and into their bedroom. Once there, the man jumped on the bed and held the child tightly. The Cavett’s called the police. Shortly after, the police arrived and removed the man and child from the house.

We later learned that the man who crashed through the door had an argument with a woman just prior to this incident. Perhaps he was trying to protect the child or keep the child away from the woman?

Obviously the real bad thing about this story is the child endangerment that took place. Again, we don’t know what the motive was for this man to do what he did. However, crashing through glass with a child in your arms is something that should be reserved for escaping a fire or other extreme life saving measure.

To make things worse, when the homeowner fired his weapon, the man held the child up in front of him like a human shield. Of course, one could make an argument that he man held up the child to identify to Cavett that he was holding a child, and to stop shooting. Which is exactly what Cavett ended up doing.

Speaking of shooting, one of the main rules of gun safety is knowing what you are shooting at before you shoot. Cavett, by shooting without knowing exactly what he was shooting at, could have killed that child. It’s easy for us to critique these things after the fact. Obviously in that moment Cavett was concerned about his and his wife’s safety. However, it serves as a good reminder to be sure of your target before you fire.

Cavett heard someone pounding on his door as he and his wife were asleep. Before he went to investigate, he retrieved his firearm. Taking his gun with him was a smart move. Sure it could have been nothing dangerous, but having his firearm allowed Cavett to be prepared for whatever situation was about to unfold.

Secondly, once Cavett recognized that the threat had diminished from his initial reaction, he remained collected. He did not become overly aggressive towards the man. His life, for the moment, was no longer in danger so he called the police. He allowed the authorities to come and end this situation as peacefully as possible without anyone else getting hurt.