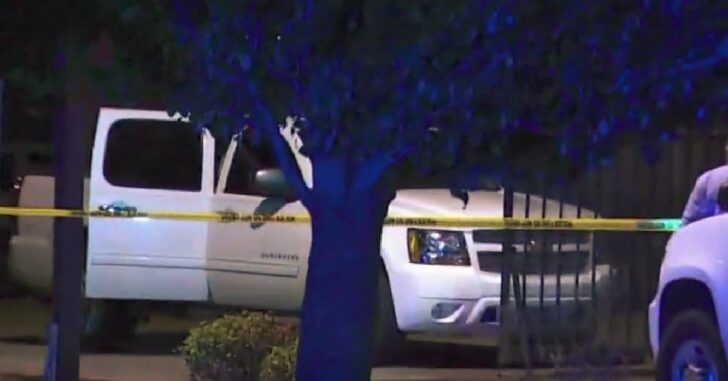 HOUSTON, TX — One man is dead and two others were sent packing after one armed vehicle owner took the fight to the bad guys in the very worst way.

Seriously, although he may have won the day, he did it in bad form, needlessly endangering his life over a truck.

Take a look at this report by the Houston Chronicle:

One man is dead and two others are on the run after they allegedly carjacked a man and exchanged gunfire with him in southeast Houston early Thursday morning.

The man who was carjacked shot and killed one of the suspects during a gunfight, said Houston police Lt. Larry Crowson. The violence broke out around 2 a.m. at an apartment complex at 7909 S. Sam Houston Parkway East, near Telephone Road. A man who lives in the complex said he was coming home when three armed men approached him and carjacked him, Crowson said.

The three men got delayed, however, when they couldn’t leave the exit gate and had to leave the truck behind. As they were abandoning the truck, the man who was carjacked came to retrieve his vehicle. At least two of the robbers started firing gunshots at the man, who returned fire, Crowson said.

The resident struck one person in the middle of the service road. He was taken to the hospital and died. A secondary, minor car accident occurred when a driver was trying to avoid the body in the roadway and collided with a service truck, Crowson said.

Now, it’s not clear in this report whether or not the owner of the vehicle was coming to retrieve an assumed-to-be-abandoned vehicle or whether he was trying to restart the conflict with these thugs, but this report by KHOU is much more definitive:

It would appear the robber’s delay was all the owner needed to grab his firearm and re-engage the threat, which resulted in him being shot at and a life being lost.

It’s really hard not to back the owner of the vehicle — it’s what we all want to do when someone violates our things, and it’s pretty Clint Eastwood, in its own way.

Stuff is just that — it’s stuff. If you’re being threatened during a robbery, defend yourself with all you got. If they’ve gotten your stuff and are breaking away, leave them alone. The threat has ended, and it’s a terrible idea to re-open that threat.

I like my car, too. You gotta stay safe out there, folks.