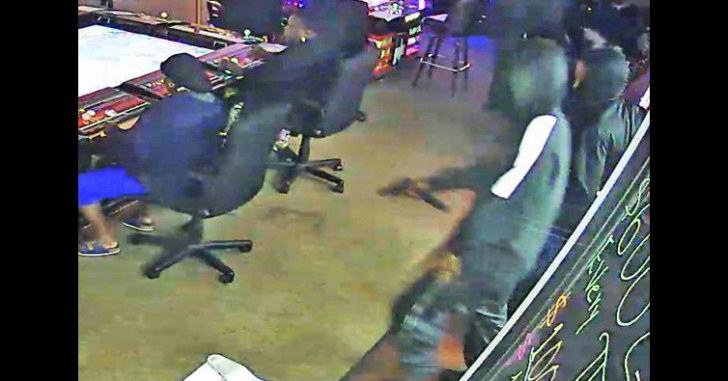 These arcades are loaded with cash from players, and are generally much smaller and less secure than a casino. They make very enticing targets for criminals.

Another attempt occurred recently at one in Yulee, Florida. However, here an armed female security guard managed to stave off multiple robbers. She even managed to shoot one of the bad guys in the rear end for good measure!

One masked man in a hoodie initially came into the business as a lookout, holding the door open for a second masked suspect, who came in pointing a gun, the Sheriff’s Office said. A third masked man also ran inside.

The man with the gun, also wearing a hoodie, ran toward an armed security guard hired by the business. He pointed a Glock handgun with 30-round magazine at her face as she backed into a break room, the Sheriff’s Office said.

Fearing for her life, the guard pulled her own gun and fired several times, hitting the gunman twice, the Sheriff’s Office said.

Holding an arm, the injured gunman slipped and dropped his weapon as he joined the other two as they ran outside to a burgundy 2016 Chevrolet Malibu, where two women were waiting.

The robber holding the gun managed to get the jump on the security guard. Clearly, the robbers had it all planned out ahead of time. To their credit, they executed the plan flawlessly. What they weren’t counting on was the guard pulling her gun in desperation and making a fight of it.

The female security guard felt her life was in danger. With a gun pointed at her by an aggressive hooded man, the security guard believed she was doing to die. With seemingly no other choice, she drew her gun and fired in self defense. Thanks to her marksmanship, she managed to get a shot on target right away.

The wound caused the robber to drop his gun. He fled for the door, where his other fellow bad guys were waiting. They ran out of the arcade and sped away in a car. The police later pulled that car over and arrested all those involved in the crime.

Because someone was shot during the attempted robbery, all suspects involved are now also being charged with attempted murder. When you count up all the charges against them, these suspects may be going away for a very long time.

Kudos to the security guard for taking a chance and for good marksmanship. She very easily could have folded and handed over whatever they asked. She may have lived if she did, or they might have shot her anyway. She used her training and took defensive action. She saved her own life, and potentially the life of others in the arcade.