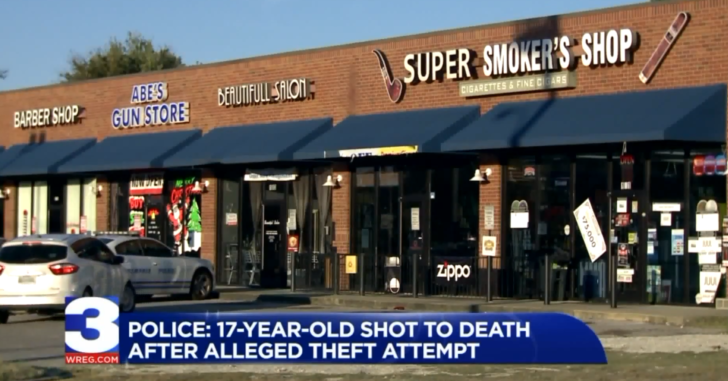 MEMPHIS, TENNESSEE — As more and more people refuse to become victims and decide to legally carry a firearm, the bad guys of our society are going to find it much more difficult to get away with easy scores. Take this group of kids as an example. Cruising around at night looking for a car to steal until they found one they liked. What they weren’t expecting was the car owner being armed and fighting back.

At around 10:15 p.m., officers responded to the Super Smoker’s Shop in the 2500 block of Appling Road. According to police, a black SUV pulled onto the parking lot, and a man got out of the SUV and tried to steal someone else’s car.

That same evening, a black SUV dropped off a 17 year old with a gunshot wound at a nearby hospital. The 17 year old, identified as Demarcus Wilson, would later die from his injuries.

Wilson’s mom of course does not believe her son could have been involved in such an act, and says that her son was just hanging out with his friends and did not try to steal anything. Unfortunately, it seems Wilson may have led a much different life while outside the home. The SUV that dropped the teen off at the hospital matches the description of the vehicle the carjackers fled the scene in.

It is important to note that in the report, Wilson and his friends fired first. When the car owner caught the thieves in the act, their first response was to draw their firearms and open fire. It was at this time that our car owner and concealed carrier returned fire, sending the carjackers scrambling to their getaway car.

It is of course a tragedy when someone so young loses their life. However, in this circumstance Wilson and his friends were willing to murder another person over a car. Putting themselves in that type of situation is equally tragic for everyone involved.

Previous article: A THANK YOU To All Veterans Who Have Served Our Great Country Next article: Cashier Fights Back Against Armed Robbers, Sends Bullets Flying In Their Direction