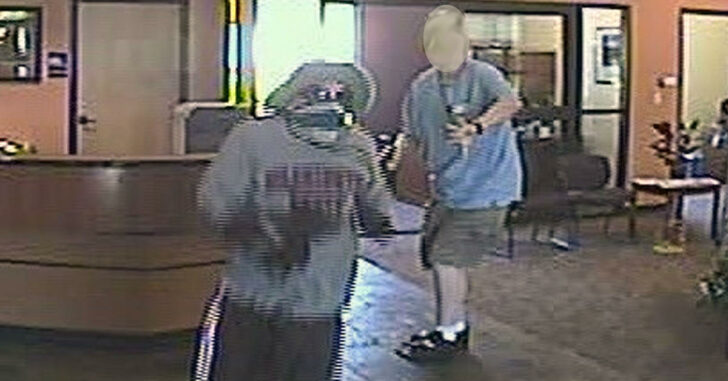 SPOKANE VALLEY, WASHINGTON — One bank robber expected little resistance when he attempted to hit an STCU branch in a nice suburban area of Spokane Valley. He didn’t expect that one of the customers was carrying his concealed handgun.

According to KHQ, the bank robber was shot once in either the shoulder or upper arm while he was attempting to clear out the bank. He is believed to have acted alone. Reports indicate he stole a bicycle from a nearby young boy and used it to peddle his way to the bank. “My mom called the cops to let them know the robber might be on my bike, he was on my bike, he did take it to get to the bank, left it there and ran off,” the kid said to KREM.

Once there, he abandoned the bike and headed inside. The robbery didn’t last long. He hopped over the counter to begin the robbery when one of the customers waiting in line drew his own concealed carry handgun and shot the robber once in the upper arm or shoulder.

The robber immediately fled the scene on foot. Neighbors were repeatedly told to stay inside while police roamed through the nearby area. The search lasted roughly two and a half hours before the police gave up.

No further word on his capture.

As some readers may be aware, I live in Spokane Valley and, ironically, not far from where the bank robbery took place. Police talked to my neighbors and it was a neighbor who informed me the crime was ongoing. I was hiking in Idaho and returned home about an hour after the bank robbery took place. As a precaution, I cleared my home upon returning through the use of my everyday carry handgun because it was extremely likely that if the man had not received a ride out of the area, he was hiding out in the neighborhood.

It’s a very “real” feeling heading through a police cordon to go home. The police had no way of securing the area completely because it’s a very non-contiguous suburban area consisting of apartments and homes. The armed robber, injured, could literally have been hiding anywhere.

Police were extremely visible as a deterrence but it was obvious they couldn’t do very much to capture a man who had evaded their best tools: K-9s and a helicopter.

While the investigation is ongoing, it’s still completely unknown where this man came from, where he went, and what threat he poses to the community.

I was extremely thankful I was carrying when I returned home because it afforded me the ability to respond to a potentially armed, injured intruder if he had sought shelter. It’s also a refresher for those who dismiss the notion that they can be called upon at any time to have to deal with a potentially violent situation in their own homes.

It’s an unexpected but realistic reason why it’s always good to carry everyday and never be complacent when returning home.

Previous article: #DIGTHERIG - Christian and his Ruger SP101 in a Home-made Kydex Holster Next article: HALOS: The Phone App That Let's You See Other People Carrying Around You