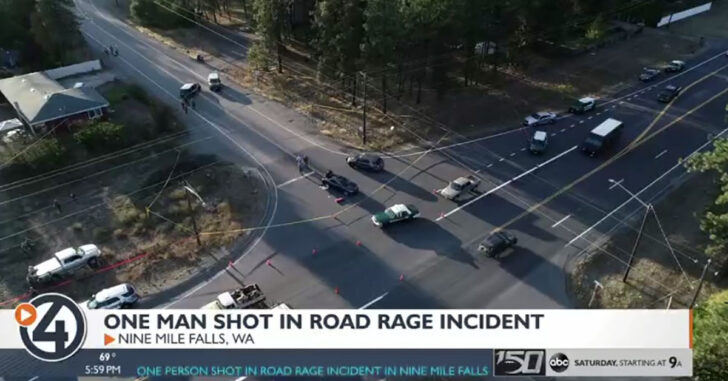 SPOKANE COUNTY, WASHINGTON — A 26-year-old man was inside his vehicle when police and witnesses say a man, who was a passenger in another vehicle, became angry with him.

Instead of letting tempers cool, the man took aggressive action.

The passenger got out of the vehicle, was yelling at the driver and began physically assaulting him.

4 News Now spoke to the mother of that driver, Monica Pooley, who said her son warned the man that he had a concealed carry permit. He pulled it out as the man approached the vehicle and told investigators that the aggressive man taunted him, even as he warned him about the gun.

According to investigators, the driver thought the man was trying to take his gun and was punching him, so he fired the gun, hitting the man in the chest. He was taken to the hospital with life-threatening injuries.

Immediately after the shooting, the concealed carrier went into panic mode and threw his firearm on the passenger seat of his vehicle and left the scene. Once he was in a safer location, he called 911.

While the concealed carrier wasn’t arrested, we have very little information to go on. By all accounts, the man who was shot was the aggressor, but we aren’t sure how violent the incident was.

That’s for law enforcement to figure out, but it would seem that the method of self-defense used was justified.

With respect to road rage, whenever possible, try to completely remove yourself from any bad situation. If you’re already in your car, try to drive away as safely as possible. Get to a safe place, be mindful of your surroundings, and call police to report the incident.

If you find your back against the wall, however, use appropriate action when responding to whatever level of threat you find yourself confronted with.

Previous article: *GRAPHIC WARNING* This Is One Of The Craziest Gunfights You'll See On Video Next article: Colt Suspends Production Of AR-15 For Civilians